The international community cannot back a return of dictatorship warns Maetig 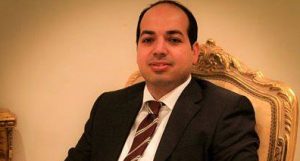 “ But rebuilding a dictatorship in Libya will be impossible,” Maetig told the Italian daily La Repubblica. “Inventing a new small Qaddafi is the dream of the mentally ill”.

The solution for Libya, said Maetig, could only be political.  That solution could be slowed down but in the end it was politicians not soldiers who had to prevail. If the military took over Libya, he predicted 20 years of civil war that would rival other Middle East conflicts.

Maetig was giving a long interview with the paper in Tripoli before Hafter went to Moscow for today’s meeting with Russian foreign minister Sergey Lavrov. He denied there was any plan for PC head Faiez Serraj to also travel to Moscow for direct talks, following up on his Paris meeting brokered by French president Emmanuel Macron.

He said that he and Serraj would soon be taking up an invitation to visit Moscow themselves. “But we don’t want to nurture direct negotiations [with Hafter] without an agenda, without a clear, precise plan” he said. “And what do we want to discuss? Something simple: the government of Libya along democratic lines”.

Russia, he said, had historically been an important partner for Libya.  It had always had an effective Middle East policy and its political leadership was careful and capable. “They know how to assess and manage their relationships, and we are their friends ” he said.

Maetig, who is understood to have opposed Serraj’s Paris meeting with Hafter, nevertheless had warm words for French president Emmanuel Macron, describing him as energetic and active. “We are amazed at his vision”  he said, adding that he did not believe that France would support a weak solution, even if it came in the form of an apparently strong new dictatorship.

Maetig also praised Italy’s backing for the Libyan Coastguard, which now includes the presence of a naval repair vessel in Tripoli. However, he did not address directly the disputed outcome of Serraj’s Rome meeting with the Italian premier, Paolo Gentiloni after which Gentiloni said the PC chief had given permission for Italian warships to operate in Libyan waters against people-smugglers. Serraj has since vigorously denied making any such invitation.

But Maetig did however respond to accusations that Serraj had opened the way for neo-colonialism by  Libya’s former occupiers. “You don’t invade a country with a naval repair ship, do you?” he said.