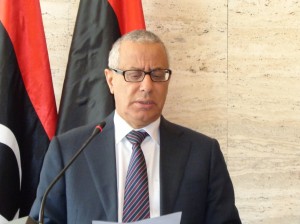 Reports two days ago that former prime minister Ali Zeidan had been freed after being seized in Tripoli are untrue his family says. It says there has been no news from him since the two spoke last Sunday morning.

Zeidan was seized from his hotel later that day, a couple of days after arriving in Tripoli. It was reported at the time that he had been taken by Haithem Tajouri, the powerful head of the Tripoli Revolutionaries Brigade. He was said to be carrying out an arrest warrant on behalf of the Attorney General. Neither have made any comment.

Two days ago, however, it was then widely reported that Zeidan had been freed and had left the country. A photo purporting to show him leaving circulated on social media.

It was “fake news” a close family member told the Libya Herald today. It was deliberately circulated to take pressure off attempts to get his father released.

“We’ve not had any contact with him since Sunday”, the family member said. “We know that he’s being held by Haithem Tajouri, and we’ve approached people close to him but they can’t be reached any more. Either they don’t reply or they’ve switched off their phones.”

He added that he was very surprised that Presidency Council head Faiez Serraj had so far made no statement about the abduction. Zeidan had had an appointment with him the very afternoon that he was seized, he said.

Zeidan’s visit to the capital followed other recent trips in the country and had been coordinated with members of the House of Representatives and other officials, his son said.