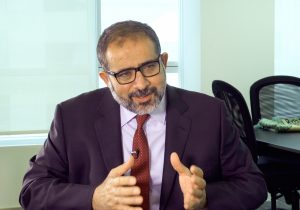 Prominent Libyan political figure and former ambassador to the UAE Aref Nayed has launched a new movement to transform Libya. Named as Ihya Libya (“Reviving Libya”), its aim, he says, is to create a stable, democratic and prosperous country.

Libya needs a new way forward, a statement from Nayed says. “After years of suffering, a difficult struggle, and many lives lost, we must now address the security, economic, human development, and governance challenges our nation faces”.

The immediate objective of the movement is to concentrate on key reforms and developments needed over the next six years. These comprise what Ihya Libya calls four “pillars”:

Ihya Libya had already identified a hundred changes required by 2023 but these needed to be refined into practical policies.

“We must now begin the process of refining these transformation projects to turn them into implementable programmes that will bring Ihya Libya Vision 2023 into reality,” Nayed says, suggesting that it would require a new government to do this.

“To be successful, initial efforts of the next government must be directed at stabilisation and reconstruction through national and local dialogue and reconciliation in parallel with pursuing priority economic, human development and public sector reforms.”

Ihya Libya Vision 2023 says that Libyans are not willing to wait another 20 or 30 years for the changes needed in the country . “Libyans want positive transformation now.” But for the moment, “security and the rule of law is lacking. Right now, economic performance is substandard. Right now, institutions that promote human development are weak. Right now, poor governance is compromising the rapidity and effectiveness of reforms.”

The movement says that it intends to provide answers and build public support for them within five years.

The first phase, over the next two years, will focus on stabilisation and reconstruction through national and local dialogue and reconciliation.

The second phase, from 2020 to 2023, will then focus on sustainable growth. This will be done through private sector development, large-scale infrastructure programmes “and structural reforms to ensure an accountable, merit-based, performance-oriented public sector”.

Ihya Libya says it has already carried out “extensive consultations” throughout the country as well as in the Libyan diaspora abroad with civil society organisations, community leaders, business figures and entrepreneurs, academics and students, professional groups, women and youth associations and the media.

The next step is to create and publish a strategy for the first phase, in consultation with these groups.

Calling on Libyans to support the movement, Nayed expressed the hope that it would be at the centre of national dialogue and that future governments would accept its proposals.