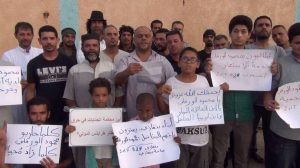 Supporters of controversial Libya National Army (LNA) officer Mahmoud Al-Warfali took to the streets of Benghazi yesterday to protest the ICC’s arrest warrant for him. In a statement issued by the organisers rejecting the arrest warrant, they accused the ICC of a range of wrongdoings from bureaucratic incompetence, to imperialism and support for terrorism.

“We, the sons and tribes of Benghazi, direct this message to the so-called International Criminal Court for being a colonial political institution that serves the interests of world imperialism and the Zionist movement and not an international human rights organisation,” the protestors’ statement read.

Welcoming Warfali’s willingness to take part in a Libyan military investigation into his actions, they accused the ICC of covertly continuing to support terrorists after they had been defeated on the battlefield by Libyan military forces. They also accused the ICC of hypocrisy for taking action against Warfali but not pursuing militant Islamists who been responsible for killings and other crimes. Where, they asked, had the ICC been for the last six years when judges and others were assassinated or people crucified in Sirte. They also asked where were the ICC charges against  those who killed demonstrators in Benghazi on 8 June 2013 or were responsible for the Gharghour massacre in Tripoli in November the same year or for other killings or acts of wanton destruction such as that of Tripoli International airport.

“This is a first step towards targeting the Libyan military, which has worked to save the country,” they claimed.

The protestors expressed appreciation for those who supported Warfali who has been accused of summary executions of some 33 Islamist militants.

The ICC has attracted considerable criticism over its lack of success in prosecuting war criminals. The court has only convicted three individuals in its 15-year history despite spending more than $2 billion. ICC chief prosecutor Fatou Bensouda has previously blamed its shortcomings on a lack of resources and continued instability in Libya.

In January, Human Rights Watch (HRW) sharply criticised the ICC for not launching investigations into war crimes in Libya. They argued that militias continued to “flout international law with impunity”, and that both the Libyan criminal system and the ICC were unable to hold criminals accountable.

Lawyers for Justice in Libya (LFJL), which welcomed the ICC arrest warrant for Warfali, has called on the LNA to cooperate with the court and deliver Warfali to The Hague immediately.

While agreeing that justice was best administered “as close to the crime as possible”, it questioned whether any trial in Libya of Warfali would be properly conducted. In any event, under international law, Libya was duty bound to surrender him unless it successfully challenged the order in court, it noted.