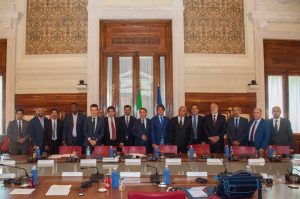 The Supreme Court has reportedly overturned a ruling by a Tripoli court that theoretically blocked any negotiations between Libya and Italy on stemming the tide of migrants crossing them Mediterranean. In March, the Tripoli appeals court agreed with former justice minster Salah Al-Marghani, lawyer Azza Maghur‏ and four others objecting to the Memorandum of Understanding signed in February by Presidency Council (PC) chief Faiez Serraj and the Italians. The Tripoli court said that there could be no further negotiations between the two sides on the issue.

So far, the Supreme Court has made no statement about the counter-appeal brought by the Presidency Council. However, Marghani tweeted the news saying: “Sad day for Human rights, refugees and Libyan/Italian conscious [sic]. S. Court cancelled Suspension of Italian Sarraj MOU on migration.”

In fact, Serraj had already ignored the March ruling. Last month, he approved a now controversial migration control agreement with Italy effectively permitting the Italian navy to operate within Libyan waters to return migrants to Libya.

As if to highlight the Supreme Courts’s ruling on the MoU, Italian interior minister Marco Minniti today met with mayors from the south of Libya to discuss Italian support for measures to curtail the migrant flows. The meeting in Rome was also attended by top officials from the Libyan interior ministry as well as Italian ambassador to Libya Giuseppe Perrone. It was a follow-up to one in Tripoli in July at which Italy agreed to provide communities in Libya most affected by smuggling and human trafficking with alternatives for growth and development.

“Libya looks forward to the timely support of Italy and the European Union for the projects already proposed and those to be proposed in the future, aimed at improving the conditions of those living in areas affected by illegal trafficking”, a statement today from the Italian interior ministry read.

The ministry also pledged continuing Italian support for the Presidency Council and its government of national accord.

The mayors of Sebha and Qatrun did not attend the meeting for logistical reasons which the Sebha mayor blamed on the Presidency Council’s government of national accord.