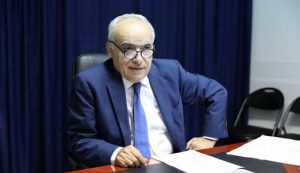 Libya has a serious problem of governance that can hardly wait to be addressed, the new UNSMIL chief Ghassan Salamé has told the UN Security Council.

In a concise and lucid first report to the UN, during which he made a point of saying he was speaking by videoconference from Tripoli, Salamé said: “The impression of a now well-rooted political economy of predation is palpable, as if the country is fuelling its own crisis with its own resources to the benefit of the few and the frustration of the many”.

He said that from his meetings during his first month in the job a clear picture was emerging.

“People are frustrated with their deteriorating living conditions.  I passed the same bank in Tripoli repeatedly from ten o’clock in the morning until ten o’clock at night and saw so many people I thought it was a demonstration.  No! They were just waiting to access a fraction of their month’s salary – the equivalent of what’s now worth $25”.

He continued: “People are tired of the endless cuts in electricity and water, which in turn take down the telephone system and the internet.  Libyans cannot understand being poor in a country rich with natural resources.  An oil producing country where they must queue for sometimes a day to get 20 litres of petrol”.

He said that Libyans to whom he had spoken wanted an end to uncertainty and instability and they respected those who were working towards these ends. Though he insisted that in Tripoli and certain other parts of the country security had “truly improved” he also said that there was widespread fear of criminality, kidnapping and the threats posed by the widespread proliferation of weapons. He noted: “My first night here in Tripoli, I fell asleep to the protracted staccato of gunfire”.

Salamé, with his background in academe, also noted that it was “unnatural” that in a country as wealthy as Libya, university departments should be closing one after another because of the “outrageous gap” in the exchange rate which was causing foreign lecturers to leave en mass.

The new UNSMIL chief said he had been fortunate to be at the Paris Serraj-Hafter meeting brokered by French president Emmanuel Macron before he actually took up his post. Among the other contacts he has since had he included House of Representatives (HoR) president Ageela Saleh, State Council head Abdulrahman Sewehli as well as talks with leaders  in Benghazi, Misrata, Zintan and Beida.

He regretted however that “due to external restrictions I have yet to visit the south. In fact a trip last Thursday was cancelled a few hours before departure, but we are working hard to make sure that it happens as soon as possible”.

Salamé defined the four challenges that he saw. The first was the continued standing of the Libyan Political Agreement (LPA) after its second anniversary this December. “There is uncertainty over what the end of the transitional period outlined in the LPA actually means. One of the most immediate tasks is to help build a consensus among Libyans on the legal and political significance of that date.  An institutional vacuum at this crucial time will not serve Libya’s interests”.

He said that as a result of his talks so far on amendments to the LPA, he believed a consensus was emerging. “I hope to be able to announce some movement on it in the coming days”.

The second challenge was the constitution voted on last month by the Constitution Drafting Assembly  but he added that the legality of this “important milestone” was currently being reviewed by the courts.

In outlining the third challenge, fresh elections, Salamé did not address specifically how the required referendum on the new constitution might fit around a general election.  However, he did say that, before what he described as the growing and widespread calls for fresh elections could take place, it would be wise to ensure political and technical preconditions for success  were addressed.  In particular, there needed to be a commitment by all parties to accept the results. Elections, he said, were not about the accumulation of power but about its peaceful and organised rotation.

The fourth challenge, he outlined was to construct the political package that would bring the amended LPA, the constitution and the general election together.

“ Here, sequencing is the name of the game” he said, “Libyans can successfully go into these three processes only if they define in what order and with what urgency they should do so, and if we help them combine the three into one single package which most, if not all, players consider acceptable”.

Repeating the mantra of his two immediate predecessors, Bernadino Leon and Martin Kobler, Salamé insisted that any efforts to forge the solution had to be Libya-led and Libyan-owned.

“The United Nations is here to support Libyans in their endeavours, and certainly not to replace them” he said,  “We will in particular work with them to promote the rapid re-unification of their political and financial institutions”.