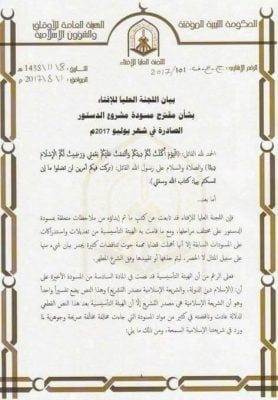 The Supreme Ifta Commission (SIC), which is part of the Beida-based interim government’s Awqaf and Islamic affairs authority, has condemned the proposed constitution from the Constitution Drafting Assembly because it allows for freedom of thought, freedom to demonstrate as well as form civil society organisations, and establishes equality between men and women.

The SIC notes that the proposed constitution says that Islam is the religion of the state and that the Sharia is the source for legislation. But it says the failure to have what it calls “legitimate controls” on the freedom of thought and expression could open the door to blasphemy such as insulting God, the Prophet and the Companions. It could also enable people to promote a religion other than Islam or “encourage apostasy based on the freedom of belief and the unity of religions”.

Moreover, freedom of thought, it says, has been a major cause of division and conflicts.

The freedom to form civil society organisations would lead to setting up groups such as those “that protect the rights of homosexuals and lesbians”, and thereby contravene Islamic teaching.

On the issue of equality between men and women before the law, it said that it was “null and void” because the Sharia “gave distinguishing characteristics to the male and the female”.

There were other “irregularities” in the draft constitution that contravened Islamic law, the SIC stated, and these could undermine the county’s peace and security and result in its disintegration.

The draft had therefore to be ignored, it ruled.

The SIC, which is close to Khalifa Hafter, has already stirred controversy with its recent damnation of Ibadi mulims as infidels. With the majority of Libya’s Amazighs being Ibadis, this has caused widespread anger, not just among the Amazigh. The SIC and the Thinni administration in Beida have tried to put an end to the controversy by stressing that the earlier SIC statement did not mention the Amazigh by name, but this has failed to have any effect.

Security and migrants at centre of latest Libya-EU talks