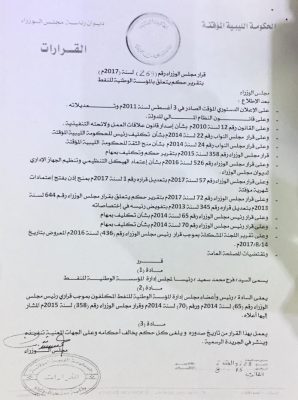 Abdullah Al-Thinni, the head of the Beida-based interim government has sacked the head of the parallel eastern National Oil Corpration (NOC), Naji Maghrabi, and the other directors. Maghrabi has been replaced by Faraj Mohamed Saied Al-Hassi, the former head of Arabian Gulf Oil Company for several years.

Although no reasons have been given, Maghrabi has effectively been operating in limbo since July last year when he and the Tripoli chairman Mustaf Sanalla agreed to reunite the company. Magharbi was said to have been offered a seat on the board of directors but in effect he became the Sanalla’s head of operations in the east. Sanalla’s subsequent dominance in the east was then confirmed in December when the Libyan National Army handed over to him, rather than to Maghrabi, the oil terminals at Sidra, Ras Lanuf as well as Sidra.

Royal Jordanian to inspect Benina ahead of possible start of flights