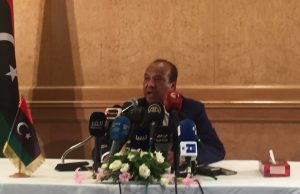 Idris Al-Senussi calling for the 1951 constitution to be restored (Photo: LH)

Prince Idris Abdullah Abed Senussi has called for the restoration of the 1951 constitution as a way of getting Libya out of its present crisis.

The Libyan people were suffering as never before a result of the continuing anarchy, he told a press conference in Tunis today. They had a right to prosperity and stability. This, though, could not happen without a working political system, he stated. For that, there had to be a constitution. The 1951 constitution was the answer.  It the foundation of the Libya state, he insisted. It had constructed Libya as a legal entity. It existed, and should be reintroduced. It would enable Libya to move forwards, he said.

All other efforts to resolve the crisis had failed, he stated, adding that efforts to devise another constitution were not working either.

The 1951 constitution would give back to Libya’s three historic provinces – Tripolitania, Cyrenaica and Fezzan – control over their own affairs. That was right, he said, but adding  that at some future point further provinces could be created by dividing existing ones. But that was for the future to decide, he said.

With the 1951 constitution making Libya a monarchy, he was asked by the Libya Herald if that was what he wanted and if he were proposing himself as king. He rejected this, saying that this was not the time to decide whether Libya should be a monarchy or a republic. That was an issue for Libyans to choose in the future.

Asked whether fresh elections would resolve the Libyan crisis, he said that there was no chance of them taking place for the moment. The security situation would not permit it.

There had to be a transitional period, he said.

“The way of getting out of the crisis that I propose involves a period of transition led by a personality around whom there is consensus, and who has had no role or taken part in the current political stalemate.”