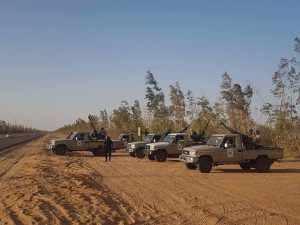 Reports that the border with Niger and Chad has been closed today by an independent force from Qatrun have been partially confirmed by a usually reliable Tebu source.

According to Fezzan Libya Org, the force consisting of army regulars, volunteers and revolutionaries from Qatrun, some 240 kilometres south of Sebha, closed the entire southern border. Confirming the closure, the Tebu source, however, says that the force is led by Barka Shedemi, who is normally based in northern Niger. The source said that Shedemi announced today that he was now blockading the border to end people-smuggling from Niger into Libya.

He is said to control some 700 kilometres of the border having free range on both sides, in southern Libya and in Niger as well as Chad.

A veteran Tebu militia leader, he is reported to have some 200 vehicles at his disposal. In the past, he was based in southern Libya and is said to have a longstanding hatred of the Qaddadfa tribe, having been captured in the 1980s in clashes with them and had his hand and leg cut off by the Qaddafi regime after being accused of being a brigand.

There is no further confirmation of the closure so far.

The Tebu source claimed that Shedemi was hoping to be paid by the Europeans for his actions.

A major Tebu leader in Qatrun, Sheikh Omar Sandou, meanwhile today told the Libya Herald that there has been a major drop in recent weeks in migrants passing through the desert town from the Nigerien border heading north to Tripoli. Although he did not have figures, he said that the decrease was “big”.