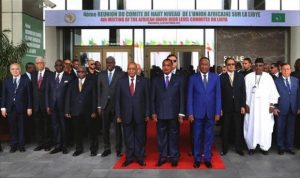 Today’s  African Union (AU) mini-summit on Libya in Brazzaville made no progress but simply heard a reprise of rival positions, while no one could hear from Khalifa Hafter who had declined to attend.

The Skirhat agreement was forced through by the-then UNSMIL chief Bernadino Leon who  was biased toward one party said House of Representatives (HoR) president Ageela Saleh.

Leon had failed in his duty by not acknowledging that the Libyan people had already made a choice in the HoR,  said Saleh. He went on to complain that while the international community acknowledged the legitimacy of the parliament, it did not recognise the standing of the government that that parliament had appointed.

Political Islam has been at the heart of Libya’s problems since the Revolution, said Saleh .

Referring to the former parliament, the General National Congress, Saleh said that political Islam had been responsible for unjust legislation including the Political Isolation Law. This banned from public office for ten years anyone who had served the Qaddafi regime in any senior capacity.

Saleh continued that after Islamists did badly in the election for the new HoR they had refused to hand over power, formed Libya Dawn militias who seized government institutions and destroyed vital installations such as Tripoli International airport.

Having condemned the way in which the Libyan Political Agreement (LPA) had been forced through, Saleh then set out the amendments to it that he believed necessary. The key change should be to  Article 8 which moved control of the armed forces from parliament to the Presidency Council (PC). He also insisted that membership of the State Council should be confined to those former members of the GNC who had been elected on 7 July 2012. Sticking to this part of the LPA would,  he said, avoid marginalising any particular region or group.

He said that the LPA required that the Government of National Accord (GNA) proposed by the PC had to be agreed by the HoR. The parliament had twice rejected proposed cabinets.

Saleh continued that the future could only be decided by Libyans talking to Libyans. There   should be no outside interference. Before his speech Saleh had had a meeting with the new UNSMIL head, Ghassan Salamé.

As Saleh went though the well-rehearsed HoR case, PC chief Faiez Serraj and State Council head Abdulrahman Sewehli looked on. But the absence of Khalifa Hafter, who declined the AU’s invitation, robbed the mini-summit of any chance of a breakthrough, capitalising on  Serraj-Hafter accord in Paris. There is talk of another meeting in the AU’s Addis Ababa headquarters this December, to which it is hoped Hafter will come this time.

Serraj’s presentation echoed his two-hour TV broadcast on Friday. He said that because it had been set up in accordance with the LPA, the PC and its GNA were not party to the conflict in Libya. Rather they were a contributor to the solution.

He blamed the blockage in the political process of the HoR and its unjustified inability to adopt amendments to the LPA . There was an opportunity, he said, for everyone to contribute to building a democratic, civil state which he stressed should have  separation of powers. Power would be transferred peacefully and the military subordinated to civilian authority.

He said that elections should be held next year and added that he believed that the head of state should be elected directly by the people. He did not refer to the document produced by the Constitution Drafting Assembly nor speculate on the timing of the referendum needed on the new constitution and how such a vote might affect the general election.

Congo-Brazzaville’s president Denis Sassou Nguesso who heads the AU’s High Level Committee on Libya perhaps recognised the limitations of the meeting he hosted today. When it came time for the official photographs, Nguesso did not push his Libyan guests forward. Instead he stood at the front with fellow committee members while Serraj could just been seen, in dark glasses, peeping over his shoulder and the diminutive Saleh could hardly be spotted at all.