Saif Al-Islam accuses Abubakr Buera of defamation; case to be heard in Tobruk 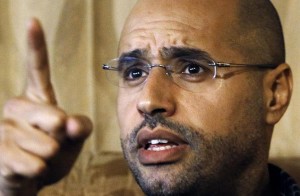 Saif Al-Islam Qaddafi has filed a lawsuit against prominent House of Representatives (HoR) member Abubakr Buera accusing him of defamation in relation to postgraduate degree from the London School of Economics. Tobruk district court has accepted the case put forward by Saif’s lawyer Khalid Al-Zaidi, and has set a date of 16 October for a hearing.

The claim that Buera defamed Saif was presented by Zaidi after the Benghazi HoR representative challenged the legitimacy of Saif’s PhD, which he in 2008.

Buera released a statement in March 2011 to the London newspaper The Independent accusing Saif of recruiting Libyan academics to write his dissertation. He reportedly alleged that Saif had gathered an assortment of PhD graduates from what was then Benghazi’s Garyounis University (now the University of Benghazi) to help him write his doctoral thesis. Buera was a professor at Garyounis at the time and specifically named an economics professor, Ahmed Menesi, as one of Saif’s collaborators. Menesi went on to become governor of the Central Bank of Libya then Libyan ambassador to Austria.

In the article Buera called on LSE to investigate Saif’s PhD. The LSE did so, but said there was no evidence to back up the allegation.

It is not thought that Saif will turn up for the case.  His current whereabouts remain something of a mystery. Since being released from house arrest and leaving Zintan, he was reported as having gone to the south of the country. However, numerous senior southern tribal figures firmly denied this. A usually reliable official from the south, however, has said that Saif is in the Wirshefana area and has been in indirect contact with him via Wirshefana militia leaders.