The Tripoli Security Directorate has warned that demonstrations in Tripoli need to receive prior authorization.

The Tripoli Security Directorate (TSD) has warned against the holding of any unauthorized demonstrations in Tripoli. The TSD is part of the Ministry of Interior aligned with Faiez Serraj and his designated and internationally-recognized Government of National Accord / Presidency Council (GNA/PC).

The TSD warning was a shot across the bows of Abdul Basit Igtet who has called for a demonstration in Tripoli’s Martyr Square on 25 September.

The TSD did not mention Igtet by name in its statement released yesterday. However, the statement is seen as a clear message by the Serraj administration and his aligned militias to Igtet.

The TSD said in its statement that within its role of ensuring the security of citizens, general public order, the protection of state and private property and assets, and its role of ensuring the right of citizens to peacefully demonstrate in order to express their opinions and express their demands within law 65 of 2012 which organizes the right to peaceful demonstration – it also seeks to ensure that the right of Libyan citizens to peaceful demonstration is not exploited or directed negatively by others in order to reach specific ‘‘political positions’’.

The TSD said that it was ‘‘with the calls for reform and improvement …which are a natural right’’.

However, it stated that the ‘‘right way to achieve a demonstration is through following the existing laws’’, in that ‘‘every demonstration must have an organizing committee which should present a request to the TSD informing of the time and place of the demonstration’’.

Tellingly, the TSD added that ‘‘Those who seek reform are not unaware of the right course and their procedures are not built upon damage, destruction and exploitation of the simple citizen’s rights and the misleading of citizens for narrow (political) causes’’. 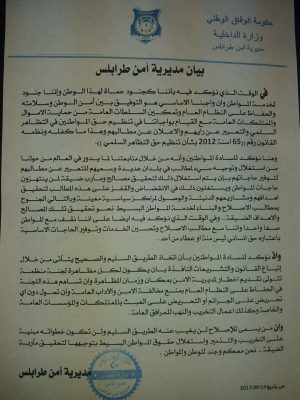 The TSD warns against unauthorized demonstrations.

It will be recalled that Controversial Libyan cleric, Sadek Al-Ghariani, has indicated his tacit support for Baset Igtet, the Swiss-based Libyan entrepreneur who last week reentered the political arena calling on Libyans to support him.

In an interview on Al-Nabaa TV and video messages on his Facebook page, Igtet called on them to go out and demonstrate on 25 September. He said he himself would be in Tripoli’s Martyrs’ Square that day.

Responding to a question on his own Tanasuh TV as to whether it was, from a religious point of view, permissible for Libyans to join the Igtet demonstration, Ghariani said that it was.

More pertinently, Ghariani also said and that he and his associates supported those who supported the Igtet demonstration.

This backing has been seen to be referring to the fact that Igtet shares the same political objectives as Ghariani. It will be recalled that Igtet had called for Presidency Council head Faiez Serraj and Khalifa Hafter to be removed and had, on Nabaa TV, launched a bitter attack on Egypt accusing it of being responsible for the destruction of Benghazi.

Igtet had said that under him, Libya would force the Egyptian military to stop its campaign in the country. As it had been defeated in Yemen and Sudan, he claimed, it would be defeated in Libya.

Ghariani also said that people must support those who would remove injustice and end the sufferings of the country. He indicated that he thought Igtet wanted to do this. Whoever stands for justice, he said, his Dar Al-Ifta (Fatwa House) would stand with them.

It will also be recalled that one Misrata brigade, the Martyr Nouri Friwan Brigade, has already announced its support for Igtet, promising to protect demonstrators on 25 September. Regarded as being on the militant side of Libyan politics, it was formerly part of Libya Dawn and more recently part of the Bunyan Marsous operation against the so-called Islamic State (Daesh) in Sirte.

With growing despair at the economic and political situation in Libya and disappointment and much rejection of all existing political leaders, support for Igtet has been reported as growing in recent days, particularly in Tripoli where the sense of alienation is at its strongest.

“People don’t care what his background is or who he is married to, they just think he might be the answer,” said a prominent Tripoli political leader. He was referring Igtet’s marriage to Sarah Bronfman, the daughter and heiress to the late billionaire Edgar Bronfman Sr, who owned the whisky and distilling company Seagrams and was president of the World Jewish Congress.

Igtet’s claim that he was backed by the Trump administration was also another reason why some Libyans were beginning to support him, it was suggested.

However, it is not really clear how widespread support for Igtet is. Igtet has had the benefit of first mover’s advantage in calling for a demonstration. He has clearly identified the huge public anger and frustration at the lack of political, economic and security reform by the incumbent Libyan political-military elite. He is attempting to tap into this anger and harness it into support for his campaign.

Libyan political commentators contacted by this writer are divided on Igtet. Some see the Igtet effort as no more than a good early PR campaign and hype. Others disagree and warn incumbent political streams against complacency on a par with that of the democrats towards Trump at the last US elections.

They warn that Libyans are desperate for a savior out of their current crisis and that events could conspire in a perfect storm whereby Igtet could be let in due to the divisions and polarization in Libya between the anti Hafter and anti Islamist camps.

Igtet, it will be recalled, was one of the four main candidates being considered by the GNC to be prime minister in 2014 to replace the ousted Ali Zeidan. However, he withdrew from the contest. In a statement on his Facebook page at the time he had said that political infighting in the GNC that had ignored the crisis in the country had made the suffering worse.

He had said at the time that he intended to stand as President of Libya, once the new constitution was in place.