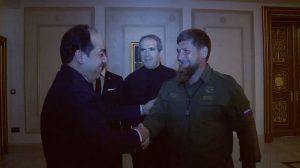 Russia has a role to lay in helping end the conflict Libya, Deputy Presidency Council co-leader Ahmed Maetig has said while in Chechnya at the beginning of a visit to Russia. Libya could also learn from the Chechen experience of civil war, he told Chechen leader Ramzan Kadyrov yesterday.

“I am convinced that Russia is able to help solve the problem, and I hope that we will come to a positive result,” he as quoted as saying by the media in the Chechen capital Grozny.

Kadyrov likewise suggested that Libya could learn from what Chechnya had gone through during its war in the 1990s.

“The Chechen Republic knows first hand what war is, explosions, murders. We once went through the same thing,” he told Maetig. “The formats were different, but I believe that both in Chechnya and Libya these same people control these processes.”

In an interview with Russian news agency Sputnik, Maetig repeated the view that Moscow has a role to play in helping Libya resolve its crisis.

“We see Russia as an important player in creating stability in Libya and that is why we want the Russian influence and the Russian presence in Libya to be as positive as possible on that issue,” he is quoted as saying. If invitations were sent to other Libyan players to meet in the Russian capital and it was aimed at brining stability to Libya, “we don’t mind any meeting in Moscow,” he said.

Maetig later flew to Moscow for meetings with the Russian government.