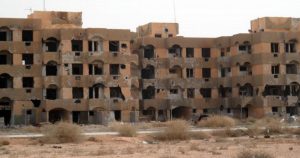 Moves made in Misrata last week to implement the agreement permitting Tawerghans to return home appear to have proved unworkable today after four Tawerghan families who had gone to Tawergha for a temporary visit, were reported to have been shot at by a Misratan militia while they preparing eat a celebration meal.

Last week’s deal, made by the Tawergha local council head Abdulrahman Shakshak who heads the Tawergha dialogue committee and Yusef Zarzah chairman of the Misrata’s Tawergha dialogue committee, was that small groups of Tawerghans would be allowed to return, initially just for brief visits. Over time, the number of returnees and the length of time would be increased until everyone was back permanently.

In line with the deal, 12 Tawerghans, from four different families, went back to their hometown today for a short visit. As they were slaughtering a sheep to celebrate their return, a group of Misratan militiamen allegedly arrived and started shooting at their feet.

No-one was injured, however an elderly Tawerghan man is said to have suffered a heart attack and had been taken to Misrata hospital.

As a result of the non payment, all efforts to start the return have been blocked. A few days after the deal, a group of Tawerghans who tried to return were forced back just a few kilometres short of the town by Misratan militiamen. In the stalemate, even Misrata’s members of the House of Representatives called in August for the Tawerghan return to be speeded up.

It is thought, though, that Misratan militias will continue to block any return until compensation starts being paid.