More than a thousand migrants caught by the coastguard 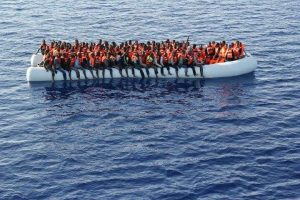 The Libyan Coastguard today said it had arrested more than a thousand migrants off the coast..

Eight craft carrying 1,074 people were intercepted at sea nearSabratha. The occupants were detained and sent to a migrant detention camp in Zawia.

The action by the coastguard appears to be part of a wider clampdown on migrant departures to Europe from Libya. There have been claims that this has been inspired by Italian payments that are actually going to the militias which control the activities of people-smugglers.

Moreover, there are unconfirmed reports that some elements within the coastguard are in cahoots with the people smugglers. Thus, would-be migrants who have paid for their passage  to Europe, are launched from Libyan beaches and shortly thereafter stopped Libyan naval patrols.