Sabratha council calls for an end to town battles 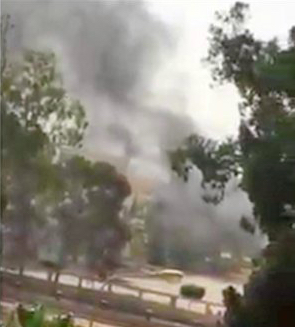 Despite further appeals for a ceasefire in Sabratha from local officials as well as from Libyan human rights organisations clashes in the town continued for a third day today.

However, it is reported that there has  been no repeat of yesterday’s intense fighting in which tanks and heavy weapons were deployed, with random firing into residential areas.

There was a truce today during which families caught up in the conflict could be evacuated. However while the Red Crescent was undertaking the operation, the Amu Brigade is to have launched a fresh attack in which one person was killed and six people injured.

Indeed the town’s municipal council has blamed the continuing violence on Ahmed Dabbashi’s Amu brigade: “The efforts of the wise and honest people of Sabratha to deal with this problem have not stopped since this morning” it said in a statement today. “The good people agreed on the need to stop the clashes…but the parties involved did not commit to stopping the fighting”.

The council also made the point that the fighting between Amu and a militia supporting the Libyan National Army (LNA) was “an internal” affair which in no way permitted the involvement of outside forces. Yet at the same time the council also demanded  “the competent authorities, foremost the Presidency Council and the ministry of defence, intervene and address the problem”.

The council was clearly reacting to reports that the LNA’s Zintan-based western commander Colonel Idris Madi had ordered local units to mobilise. In July a  force of some 500 LNA supporters from the Watiya airbase and surrounding towns came into Sabratha and forced the Islamists out of the town.

The fighting began on Saturday following the killing of an Amu member who refused to stop at a checkpoint run by the LNA-linked militia. The checkpoint was then attacked by Amu people causing two further deaths.

Much of the firing appears to have random by people perhaps unfamiliar with the weapons. It is reported that at least one shell landed in the ancient ruins of Sabratha damaging the theatre. Until now the archaeological site, which is arguably the finest-preserved in Libya, had largely escaped damage in the conflict.