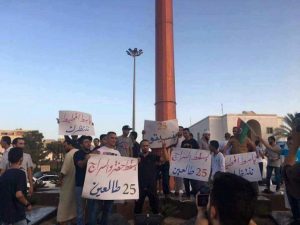 A small group of demonstrators gathered in the centre of Misrata last night in support of Baset Igtet, ahead of his proposed rally in Tripoli’s Martyrs’ Square on 25 September. Numbering less than 50 and said to be mainly refugees from Benghazi, they expressed support for him, condemning Haithem Tajouri’s opposition to the rally.

There have also been reports that Igtet is planning to visit Misrata in the next few days, but these have not been confirmed.

Meanwhile, a photo has been leaked showing Igtet meeting with leaders of the Muslim Brotherhood’s political wing in Libya, the Justice and Construction Party (J&C), and the head of Tunisia’s Ennahda Party, Rachid Gannouchi.

There are claims that the photo was taken this week in Tunis, and indicates that Igtet is looking to gaining support from the MB. However, there are counter claims that it was taken in 2014 when Igtet was campaigning to become prime minister and that it has been released now to damage Igtet.

The photo shows J&C head Mohamed Sawan with other J&C leaders as well as heads of Ennahda, the Tunisian political wing of the Brotherhood. 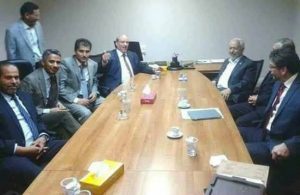 Gannouchi has played a strong mentoring role with the J&C, advising it to take a moderate path and work with others of different political persuasions, not least Khalifa Hafter. He is known to be in close contact with the man seen as the real leader of the Libyan Brotherhood, Ali Salabi. He has also continued to play a role in Tunisian efforts to bring about peace in Libya.