Serraj calls on UN to lift sanctions on Libya’s assets 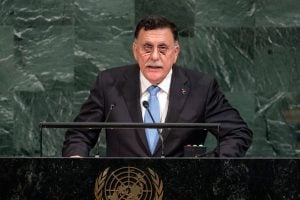 The head of the Presidency Council (PC), Faiez Serraj, has called the international community to lift the embargo on the frozen Libyan assets. It was causing Libya to lose some $1 billion each year.

“We ask for lifting the ban on the assets so the country can sustain itself”, he said in his address to the UN General Assembly on Wednesday.

The Libyan Investment Authority ’s assets have been under UNsanction since the 2011 revolution.

Claiming that all Libyan parties were ready to deal with the challenges facing the country, he insisted the Libyan Political Agreement remained the only way forward during the current transition period.

Serraj stressed the need for strategic partnerships with friendly countries. No one country could tackle the issues of migration and human trafficking, he said, calling for international support, in particular from the EU countries, to help control Libya’s borders. The migrants, he insisted, had to return back home and not be resettled in Libya.

“For the migrants in Libya, we emphasize on the need for providing humanitarian assistance programmes for them and the GNA government is doing all it can to help them.”

Drawing attention to efforts to unify the country’s security forces, Serraj explained that the war on terror in Libya was not yet finished and there had to be a united Libyan army to defeat it.

“We are looking forward to the hard work to unify the army in whole of the country to build a national army to defeat the terrorism,” he told the General Assembly.

He praised the United Nations reform plan signed two days ago adding: “As part of this reform Africa should have a permanent seat on the UN security Council.”

Separately, in his speech to the special meeting to hear UN special envoy Ghassan Salamé’s action plan on Libya, the PC head said it had to have a clear timeframe, should ensure presidential and parliamentary elections and come up with effective ways to unite state institutions. Stressing the importance of the Paris meeting with its agreement to support the democratic process and the peaceful transfer of power through elections, he paid tribute to the decisive role played by Salamé and the international community in trying to resolve the crisis. But it had to send a clear message that there was no place for a military solution. It had to deal with the government of national accord alone and have no dealings with any parallel entities.

There also had to be a unified army under civilian control, and all military actions had to stop except in relation to the war on terrorism.

He urged the UN, as well, to have alternatives in mind in case the action plan could not be implemented. 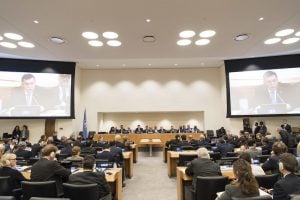