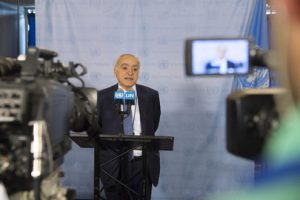 Members of the Libyan Dialogue will next week to work on amendments to the Libyan Political Agreement (LPA)  which will then be put to a National Conference, UNSMIL chief Ghassan Salamé said in New York today.

The surprise in Salamé’s unveiling of his much-heralded new action plan, is the National Conference which would effectively by pass the House of Representatives (HoR) whose refusal to sign off the LPA has stymied any settlement. However, the HoR is to be part of the conference.

He said the gathering was “intended to open the door to those ostracised, those self-marginalised, those players who have been reluctant to join the political process.”

It would be what Salamé described as their “epitome moment of their National Reconciliation”.

He told the high-level Libya meeting at the UN: “To be inclusive, this conference needs to bring together members of the House of Representatives, of the High State Council and many others insufficiently or entirely non-represented in these two bodies. The United Nations would be honoured to host such a conference under the auspices of the Secretary-General”.

Salamé insisted that it was not he who had designed the action plan. It had emerged after he had criss-crossed towns, cities and countries speaking to Libyans.

“It is, in essence, a synthesis of their hopes and goals. The Libyan people want a process which is inclusive. A way forward with clearly-defined stages and objectives, where each stage calls for the next, in a strict timeframe”.

The conference would, he said, on a consensual basis select members of reconfigured executive institutions. One of the widely-mooted parts of his action plan has been to cut the membership of the Presidency Council (PC) from nine to three.

After the conference, he explained, the HoR and the Constitutional Drafting Assembly (CDA) would work in parallel. Parliament would make a priority of passing enabling legislation first for the referendum on the new constitution and then for the presidential and parliamentary elections. The CDA would refine its proposals on the basis of suggestions made by the National Conference.

This political sequence, he said, had to be underpinned by concrete progress in persuading armed groups to accept the political process and to return to civilian life . It also required the creation of a single national army.

The High National Election Commission had to prepare for the three votes while efforts at local reconciliation were intensified.  Salamé also called for decisive action to deal with Libyans whom the conflict had forced from their homes. This would require funding. In addition, he said fresh money was needed from the international community for the Stabilisation Fund which has been tasked with overseeing urgent repairs and maintenance to collapsing infrastructure.

“Within a year from now,” said Salamé, “we must reach the final stages of the process. These are a referendum for the adoption of the constitution, and then, within the framework of the constitution, the election of a president and a parliament, henceforth clearly marking the end of the transition”.

The UNSMIL chief gave a stark assessment of Libya’s fortunes since the Revolution.

“Six years ago, the Libyan people were promised a transition of 18 months. Their transitions continue, and if no action is taken, no end is in sight”.

In his many meetings with Libyans, he said one message had been resoundingly clear. Libyans were fed up with transitions, a succession of which had failed to give them stable government and decent living standards.

“Rather, they have suffered from deteriorating conditions. Their economy is on a steep decline. Their infrastructure and public services are rapidly deteriorating. Law and order is scarce, and all the while, there is no single state authority which the people of the country can look towards. While there have been successes here and there, and they must be built upon, they are woefully insufficient”.

Libyans wanted an end to uncertainty and unpredictability.

This had to happen in all areas of governance: political, security, judicial, social and economic.

Salamé said: “Libya is a country with great possibility and its citizens can have a bright future. A Libya which meets this promise is in the interest of all of us here. A stronger Libya will be better able to fight terror groups who operate on its land. It will be better able to control its borders. It will be an effective partner for all those seeking to work with it for shared goals and interests”.

While he admitted that his action plan was ambitious, he insisted: “This future is within reach”.