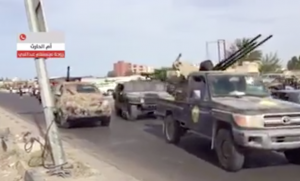 In continuing clashes today in Sabratha, it is reported that the forces of the Anti-ISIS Operations Room (AIOR) has taken control of the downtown Qamar Hotel, killing three members of the rival 48th Battalion in the process.

The clashes are now into their eighth day, having started late last Saturday with the shooting dead of a member of the Amu Brigade, also known as the Brigade of the Martyr Anas Al-Dabashi, at a checkpoint in the town manned by the AIOR.

(The Amu Brigade is effectively the same as the 48th. The latter is the section of the Amu operation that was legitimised by the Presidency Council as part of its armed forces.)

Efforts by mediators have still failed to bring about a ceasefire although the 48th Battalion again signed up to one today aimed at allowing the evacuation of more civilians from the battle zone. However, AIOR has again refused to do so, once more claiming that its rivals are jihadists and that its job is to crush them.

Yesterday, the Sabratha branch of the Red Crescent said that it had so far evacuated more than 100 families from the town centre but that there were others who needed to leave. It could not reach the, however, because of the fighting. Conditions in the town, according to local Red Crescent member Ahmed Al-Alaghi, were “very bad”.

Meanwhile, UNESCO has called on the belligerents to stop the violence and ensure that the historic Roman ruins and the museum near the town centre were properly protected. There have been photos of alleged shell damage to the Roman theatre as a result of the fighting.