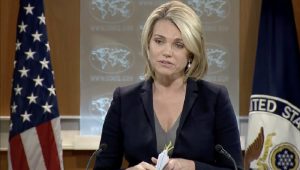 US State Department spokesman Heather Nauert said this evening her government applauded Salamé’s “outreach” to Libyan leaders and called on all Libyans to support and engage in his mediation efforts.

She added: “The United States will not support individuals who seek to circumvent the UN-led political process”.

She insisted that the LPA remained the framework for a political solution. “In this regard, we strongly support UN facilitation as the Libyan people carry out this critical transition, specifically by seeking to negotiate mutually-agreed limited amendments to the LPA, adopt a new constitution and prepare for national elections”.

Nauert said Washington remained committed to working with Libya, the UN and its international partners to help advance political reconciliation, defeat terrorism and promote a more stable future for Libyans.