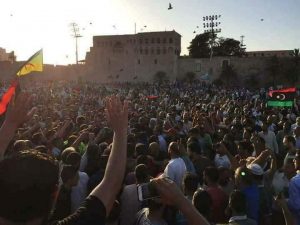 Despite warnings from the Security Directorate, Haithem Tajouri and other militia leaders in Tripoli that protests in Martyrs’ Square would not be allowed today, a large number of demonstrators heeded the call of entrepreneur Baset Igtet to join him there and back him as potential leader of the country. The event was peaceful, in spite of the presence of a significant number of anti-Igtet protestors and despite some of the those on both sides said to have taken weapons just in case there was violence. The two sides were kept part by plain clothed security forces, said to belong to Ghneiwa’s central security authority.

Igtet himself arrived in Tripoli very early this morning with his campaign team from Tunis. After being initially delayed at Mitiga airport because paperwork was supposedly not in order, he went straight to Tajoura to meet other supporters before then heading later to Martyrs’ Square.

Initially Martyrs’ Square contained mainly anti-Igtet protestors who accused him of being a front for Qatar, the Muslim Brotherhood and other hardliners in the former Libya Dawn movement. They demanded he be thrown out of the country.

Gradually, however, more and more Igtet supporters moved into the square, initially coming from Algeria Square, eventually overwhelming the opposition. Nonetheless, it was difficult to assess the numbers in the square with any accuracy. Some reports put the figure at 2,000; others suggested less, at around 1,200. Numbers fluctuated during the afternoon as people left but were then replaced by others who arrived. Igtet himself, who made no set-piece speech at the event, headed to Zliten once it was over.

It is not clear if the demonstration will have had any effect on the political situation, other than being seen to align him with the Muslim Brotherhood and the radicals. A significant proportion of those who attended appeared to be more interested in protesting against Hafter rather than for Igtet. Many others were simply spectators, there to see how the event would turn out.

Despite the ban by the Presidency Council and militias, Igtet claimed in an interview beforehand with the Libya Observer that many in the police privately supported him. However, recent days have seen an

unprecedented number of attacks on social media against him, focusing in particular on his background and that of his father, who became an Islamist and died in Pakistan, and the background of his wife and her family.

Meanwhile, many residents in Tripoli did not go to work today fearing violence between of the security services and the demonstrators.

For its part, the PC finally decided to take a relatively sanguine approach to the event, praising the security forces for ensuring that the protests were peaceful and adding that peaceful protests were one of the achievements of the 2011 revolution. It nevertheless repeated that it would “not allow any individual or entity to jump to power, obstruct the political track, sow confusion and threaten the security of the capital”.