Sabratha fighting rages on as many townspeople flee 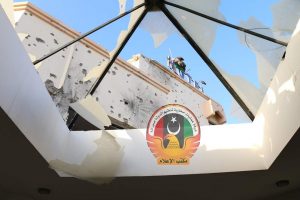 Damage to the Qamar Hotel captured from the 48th Battalion on Saturday (Photo: AIOR)

Sabratha hospital has issued an urgent call for trauma kits and blood as the fighting in the town continued for a tenth day, with at least 17 dead and 48 wounded since the violence began.

So pressed is the hospital that casualties are being sent elsewhere. A woman hit by shrapnel today in her kitchen was transferred to Zuwara for treatment

Thus far all mediation attempts by local elders have failed, with two uneasy truces quickly breaking down. The Libya Red Crescent has reportedly evacuated almost all the population from the old part of two where the fighting has  become fiercest.

There are international concerns for the safety of the outstanding ruins of Sabratha’s ancient city. Pictures last week showed a shell hole in the monumental masonry of the theatre. Today UNESCO called for a ceasefire and appealed for this precious part of Libya’s archaeolgical heritage to be protected.

However a halt to the fighting has been rejected by the Anti-ISIS Operations Room (AIOR) which says it is battling jihadists in the form of the Amu Brigade, also known as the Brigade of the Martyr Anas Al-Dabashi. This militia is effectively the same as the 48th Battalion, which the Presidency Council’ has said is part of its armed forces.

A normally reliable social media source said today that three migrant detention camps under the control of the Amu Brigade could not be reached. The source also said that while rivals fought in Sabratha, people-smugglers in Zuwara had stepped up their operations.