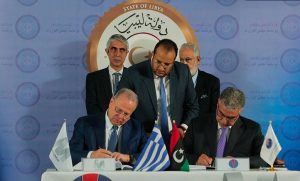 Signing in Tripoli of the contract between GECOL and METKA for the new Tobruk power station (Photo: GECOL)

The contract to build the new 740-MW gas-fuelled power station in Tobruk was signed this morning in Tripoli by he chairman of the state electricity company GECOL, Abdul Majeed Hamza, the CEO of Greek engineering firm METKA, Evangelos Mytilineos, and General Electric of the US.

Following the signing, there was a meeting with Presidency Council head Faiez Serraj.

The electricity supply has been a major problem for several years in  fast-expanding Tobruk and plans for a new power plant have long been under discussion. Finally in January, METKA announced that it had been selected to build a new generating station. This was followed in April by a memorandum of understanding between it and GECOL. Earlier this week, a delegation from METKA was in Tobruk to meet with the town’s mayor, Naji Maziq, and brief him on the final details.

Although Tobruk supposedly answers to the interim government headed by Abdullah Thinni based in Beida, the letter has no money. As a result, the municipal authorities have turned to the Presidency Council for help. Eight weeks ago, Maziq sent another of his deputies, Ali Saghir, to Tripoli to negotiate financial support from Serraj and his government of national accord (GNA) for a range of projects in the town. The power station was part of this and was authorised by the GNA.

Work on the power plant is due to start next month. When the project was first unveiled by METKA, it was announced that three General Electric gas turbines would be installed. It now appears that there will be four, with the station’s capacity increased from 500 MW to 740 MW. According to a PC statement today, it is expected that the first turbine will operational by the middle of next year, with the second, third and fourth coming on stream every month thereafter.