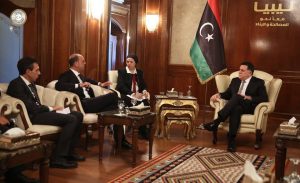 According to the Italian foregn ministry, Alfano went to Tripoli to stress Italian support for the action plan to promote political dialogue in the country unveiled last week in New York by UN special envoy Ghassan Salamé.

Alfano is also said to have confirmed to Serraj that there was no place for a military solution to the Libyan crisis. The welcome given Hafter, he explained, was simply part of Italy’s desire to speak to all sides and to see Libya united.

The meeting was attended by the PC’s foreign minister Mohamed Siala.

Alfano, who was last in Tripoli in May, also had separate meetings with State Council president Abdulrahman Sewehli and PC deputy leader Ahmed Maetig.