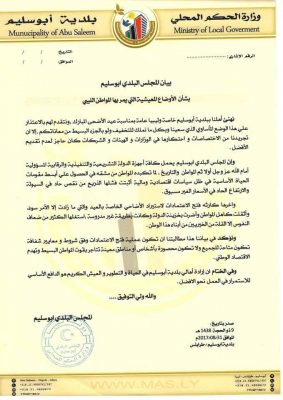 Greeting residents on the occasion of Eid Al-Adha, the mayor of Tripoli’s Abu Sleem municipality has used the occasion to apologise for the lack of services, the steep drop in standards of living and other difficulties people are suffering.

Mayor Abdulrahman Al-Hamdi said the financial problems that people were facing – the lack of liquidity and soaring prices which had never been so high – were entirely the fault of the authorities across the country. He effectively included in this the Presidency Council and its government of national accord, the House of Representatives and the Central Bank of Libya.

His own and other municipal councils were unable to deliver public services because relevant government ministries were refusing to delegate powers. They were keeping them to themselves, he said.

He also criticised the Central Bank over the letters of credit to import sheep for Eid. Suggesting that there may have been corruption involved, he said that the process  had been badly mishandled. Ordinary people had suffered as the result, facing high prices, he said.