Buraq to restart flights after major service to plane 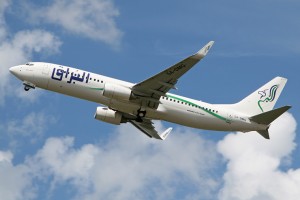 Buraq Air is expected to resume international and local flights in the next few days after one of its two Boeing 737s flew back to Tripoli today from Istanbul following a four-month overhaul.

Buraq stopped flying three months ago, hit by a combination hard currency cash-flow problems and maintenance problems. It has just two 737s both of which required major maintenance –in the case of one, a major engine overhaul.

Unlike Libyan Airlines and Afriqiyah Airways which have their own in house maintenance departments or Libyan Wings which has a special arrangement with Qatar Airways, Buraq has had to reply of outsourcing its maintenance abroad and pay for it in hard currency. In normal times that would not be a problem, but for some time because of decisions by the Central Bak of Libya, it has been unable to access hard currency.

Between stopping its international flights in June and stopping all flights in July, Buraq leased a small aircraft from Ghadames Air, but that proved financially unviable.