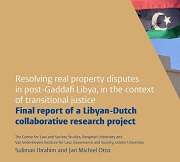 A joint Dutch-Libyan report on ”Resolving Real Property Disputes in Post-Qaddafi Libya, in the Context of Transitional Justice” was published this week.

The report is the result of collaoration by Van Vollenhoven Institute for Law, Governance and Society (VVI), Leiden University and the Centre for Law and Society Studies (CLSS) at the University of Benghazi, and with support of the Royal Netherlands Embassy in Libya. It is authored by Suliman Ibrahim and Jan Michiel Otto.

The authors say that the genesis of this research project goes back to a suggestion made by Salah el-Marghani in December 2012, who had just been appointed as Minister of Justice. When the authors explained that they were embarking on a socio-legal study on access to justice in post-Qaddafi Libya, Marghani had suggested that particular attention be paid to the problems caused by Law No. 4 of 1978 (Law 4) which had radically changed property relations in Libya.

The law had led to a vast number of plots, houses and other buildings being expropriated and ownership changed ‘for the benefit of the people’. With the end of the Qaddafi regime, previous owners wanted their property back, or at least to be fairly compensated.

Besides Law 4 related disputes, other disputes caused by an earlier, and less known but no less problematic law on agricultural land, Law No. 123 of 1970 on the Disposal of State-Owned Agricultural and Reclaimed Lands (Law 123) is also studied in the research.

While prioritising Libyan views and experiences, the project developed policy and legislative suggestions on how to integrate such mechanisms into Libya’s efforts towards transitional justice. These suggestions anticipate a return to unified government along the lines of the Libyan Political Agreement (LPA).

The project focused on two mechanisms. The first is a committee formally established in 2006 to address ‘misapplications’ of Law 4. The second, more informal, mechanism is that of traditional leaders to whom those affected by Law 123 have often resorted. Law 123 was used by the former regime to redistribute agricultural land that was appropriated primarily from tribes.

The report says that findings show that property disputes have become widespread in the post-Qaddafi era. Law 4 is estimated to have resulted in the expropriation of 56,000 to 75,000 properties, but only 25,148 applications were submitted to the 2006 Committee. Many former owners are still waiting for a more satisfactory legislative response. Even amongst those who applied and succeeded in getting compensation decisions, there are those who now demand restitution instead.

Those who already received compensation may well submit new demands. Hence, a considerable number of actual and potential disputes about properties affected by Law 4 remains. Political division and armed conflict have perpetuated these disputes, or even aggravated them.

In Benghazi, fights have resulted in large-scale property destruction. While the state is expected to rebuild, former owners are contesting this. If the expropriated house is no longer there, the former owner claims full rights to the valuable vacant land. In that case, the state could build a new house for the occupant elsewhere. This obviously will have an impact on cases thought to have already been settled.

Law 123 applied mostly to unclearly divided tribal lands; therefore, it is unclear how many properties it affected. Still, it is possible to obtain clear indications of how many distinct individual holdings resulted from this law in particular regions. For example, the Al-Jabal Al-Akhdar Agricultural Project in the eastern region includes 4,104 model farms. Disputes in this area, in particular, have at times taken violent forms and resulted in casualties.

Generally, the report says, government responses have been inadequate. A revolutionary fervour in the immediate aftermath of the February 2011 revolution resulted in calls for ‘cleansing’ the legal system of the former regime’s laws, institutions and personnel. The former owners, presenting themselves as victims of this regime, lobbied for a law addressing the legacy of Laws 4 and 123.

This resulted in three draft laws. One of these drafts did not propose to end Law 4 retrospectively, but this made little difference as to the details of addressing the consequences of this law. The drafts adopted restitution as the preferred remedy, and fair compensation in the exceptional cases where restitution would be unattainable. In case of restitution, the drafts proposed to give the occupant monetary or in-kind compensation.

They envisaged a place for a committee similar to the 2006 Committee. One draft also addressed Law 123. It proposed to end it retrospectively, and return the land to the former owner while allowing the occupant to stay in the dwelling attached to the land and a small piece of land surrounding it. Here, the draft adopted arrangements tribal leaders in Al-Marj had already reached and enforced. In fact, such arrangements are forbidden by Law 123 but this did not, it seems, concern them. In Bani Walid, closer to the central government, however, traditional leaders have not been involved in resolving such disputes realizing, apparently, that Law 123 is still in force.

However, the subsequent political changes affected these responses. The General National Congress (GNC) failed to enact any of the three drafts in time. When it enacted in late 2015 Laws 16 and 20 to end Law 4 and deal with its consequences, this came rather late as the GNC’s term had then already expired.

The changes have also affected the solutions that tribal leaders concluded in Al-Marj. In September 2015, the Speaker of the House of Representatives (HoR) issued a circular stating that Law 123 was still in force. Subsequently, the Commander-in-Chief of the National Army warned against any transgressions over public and private land. Since then, tribal leaders have stopped concluding such arrangements, and the ones already concluded were struck down by courts in Al-Marj.

Yet, these changes can contribute to a better redress of the disputes at hand. A new environment, in which the revolutionary fervour is less dominant can allow for a more objective, hence sustainable, approach; one to which both the former owners and occupants contribute, under the state’s direction.

The starting point would be to put solving grievances ex Law 4 and Law 123 among the government top priorities. Then Laws 16 and 20 should be deemed non-existent for lacking a legal basis, and, perhaps more importantly, being influenced by the former owners in the complete absence of occupants, and, hence, largely favouring those owners’ interests. These laws also fail to situate the redress of Law 4 grievances within a transitional justice framework.

Also, the HoR should build on the experience of the 2006 Committee. Against a background of an initially restrictive mandate, the Committee succeeded in getting restitution cases increased, and the occupants given limited space to submit applications.

Facing the consequences of the 1985 burning of real property registration records, the Committee showed great pragmatism and flexibility by accepting proof methods such as testimony. The alternative would have been to reject all claims. The 2006 Committee corroborated such methods by resorting to state records which was tricky as they are not fully reliable.

In the future law, the Committee, or a similar body, would need to be situated within a Transitional Justice (TJ) framework for the following reasons:

– The state cannot afford the cost of full compensation according to the present market value of the property and lost earnings.

– There are many other human rights atrocities awaiting remedy as well.

– A society where basic services are lacking, may call for other priorities.

– Reparation in a TJ context includes partial monetary compensation, and other forms of in-kind compensation.

The new law will not have to start from scratch as Law 29/2013 on Transitional Justice already applies to Law 4 grievances, notably its provisions about reparations, and the role of the Fact-Finding and Reconciliation Commission (FFRC). While Law 29 repeals legislation on the 2006 Committee, it allows for a similar specialized body dealing with Law 4 disputes under the direct supervision of the FFRC. The new law should establish such a committee.

As for Law 123 related disputes, any redress should start with deciding whether this law should be abolished or retained. This project advises against ending it. Firstly, it would be difficult to restore the pre-Law 123 situation. This law replaced tribal land tenure with distinct individual holdings, and decades of urbanisation and individualisation cannot be undone. Secondly, Law 123 resulted in transforming lands into productive farms, and abolishing it would risk losing them.

After Rome, Hafter to head back to Paris