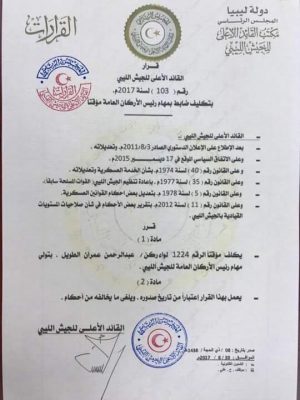 The Presidency Council (PC) has finally appointed a chief of staff to head the Libyan army. As expected, the post has gone to Major-General Abdulrahman Al-Tawil. Appointed head of the Temporary Security Committee in January last year, he has in effect been chief of staff ever since.

There is, however, no coherent, structured or united Libyan army or airforce as yet for him to head.  The Libyan navy is the only section of the armed forces that can be said to be operating under the PC’s command.

It is also not clear if his remit will include control over the Presidential Guard which is being formed under the leadership of Colonel Najmi Al-Nakua. It is thought that while Tawil and the armed force come under the defence ministry, the presidential guard will be answerable directly to the Presidency Council – specifically its head, Faiez Serraj.