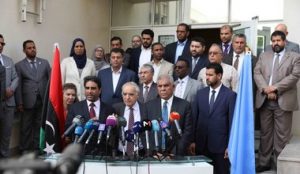 The dialogue committees of the House of Representatives (HoR) and the State Council (SC), meeting in Tunis to work out amendments to the Libyan Political Agreement have agreed to reduce the Presidency Council (PC) from nine to three and that the prime minister should be a separate appointment.

The decisions, which had been widely expected, were announced at a press conference in Tunis today. Commenting on the two committees’ talks which started last Tuesday, UN special envoy Ghassan Salamé spoke of there having been “a positive atmosphere and a clear convergence of views”.

The two sides will now report to their colleagues before again sitting down to hammer out the remaining points of contention. These centre on supplementary Article No. 8 on who exactly appoints top military, civil and security posts, and the HoR demand that the SC contain not 145 members as currently stipulated in the LPA but 200, being the 200 members of the General National Council originally elected in July 2012, or those who replaced members who resigned.

At present the SC consists of 138 members.

The addition of those former GNC members who were not invited to join the SC is being resisted by some of the current membership who fear that it will alter its balance of power.

It is also reported that there has been discussion over extending the term of Constitution Drafting Assembly by another three months to come up with an amended version to what it proposed or whether there should be a return to the 1951 or 1963 constitution.

Both the heads of the two dialogue committees, Abdualslam Nasia of the HoR and Musa Faraj of the SC, have expressed optimism about the remaining issues being resolved.

Nasia also said that while the mechanism of nominating the new PC members and the prime minister had been covered, no names were mentioned.

“We have not discussed any names, nor did we build these structures with people in mind.”

For his part, Faraj has said that if and when the amended LPA is approved, there will be a gap of some 50 weeks before parliamentary and presidential elections could be held.