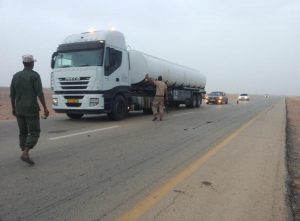 Over a million litres of fuel were today heading to the south of Libya as the National Oil Corporation (NOC) sought to beat the lawlessness which has stopped southern road tanker movements.

NOC’s fully-owned subsidiary, Brega Oil and Marketing, sent of 910,000 litres of petrol and quarter of a million litres of diesel in convoys heading to Jufra and Sebha, to replenish 11 fuel stations in the south.

In recent months, Brega drivers have been killed, kidnapped or dumped when their trucks were seized en route to the south. The most vicious attackers appear to have been mounted by terrorists of the so-called Islamic State. However,  there is strong evidence that some of the trucks have been intercepted by militias involved in fuel smuggling. On at least one occasion, there has been the suspicion that a driver was in cahoots with the smugglers.

The result has been a dearth of fuel in the south of the country and rocketing prices for petrol and diesel that did get through.  This June, the Fuel and Gas Crisis Committee decided that no more shipments to the south could be made until the Presidency Council (PC)  and local authorities along the route were able to protect shipments.

On Saturday, NOC chief Mustafa Sanalla demanded that exceptional supply efforts should  be made until the fuel shortage in the south was overcome.

What is not yet apparent is how NOC has organised this. The state oil company says that it has  reached deals with local authorities and tribal elders along the route. It also says that it has  received support from the PC’s Government of National Accord (GNA).

However, it is currently unclear if that support involves armed escorts for the trucks heading south. The PC’s presidency guard is still forming, therefore the only military formation likely to be available to protect fuel trucks on their southward journey would be Misratan units from the Bunyan Marsous operation which ejected terrorists from the so-called Islamic State (IS)  from Sirte last year. Elements of this force have already been deployed hunting down IS fighters to ares to the south of Sirte. These search and destroy missions have been supported by US airstrikes.