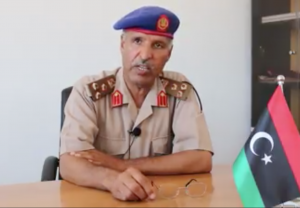 The Anti-IS Operations Room (AIOR) has taken full control of Sabratha, defeating the 48th Battalion and the linked Amu Brigade.

In a statement this morning, it called on residents not to take revenge against the families of the Amu Brigade members or other militants, or damage their properties. There have been reports that the houses of Amu leader Ahmed Dabashi and one of his relatives have been tourched.

The municipal council, congratulating the AIOR, also called on people not to carry out revenge attacks, adding that those who had fled their homes because of the fighting should not return until it was confirmed that they were free of any explosive devices and were completely safe.

As part of a peace deal to finally end the conflict, the LNA’s 103rd Infantry Battalion, which has supported the AIOR, is reported to have withdrawn. Sabratha Media Centre, which until now has supported the Amu and the 48th, has confirmed both the withdrawal and the AOIR’s control.

It says that the Amu, too, has “withdrawn”, although it was largely forced out some days ago.

The peace deal was secured by Major-General Usama Juwaili, commander of the PC’s western military zone, in cooperation with Sabratha elders. Last night, saying that those responsible for attacks would be arrested, he called for weapons to be handed in and promised that after his forces had moved into Sabratha and ensured continud peace and security over the next two weeks, the local police would then take over.

The end to the fighting follows a statement yesterday by Sabratha Mayor  Hassen Dhawadi supporting the AIOR, saying that the vast majority of the town’s population backed it too. People, he said, wanted all militias out of the town and security to be provided by the army and police.

There were demonstrations in Sabratha on Tueday, with people declaring their support for the army and police and opposition to the Amu and militia.

Even before today’s events, the AIOR was already seen as having defeated the Amu and the 48th, despite support for them from members of other militant groups, including the Benghazi Defence Brigades (BDB), now based in nearby Sorman after they were forced out of Tripoli in May. According the head of the AIOR, Brigadier Omar Abdul Jalil, some 30 members of the BDB had been fighting with the Amu

An official at the municipal council also told the Libya Herald yesterday that at that point the AIOR controlled 95 percent of Sabratha.

There were, however further clashes on the outskirts of Sabratha yesterday, with reports of airstrikes against the Amu which was said to have tried to launch a counter offensive in alliance with the Mohamed Al-Kilani brigade from Zawia, hoping to re-enter Sabratha from the east. It was repulsed. Other sources, however, said that there were no airstrikes and that although aircraft from Wattiya airbase had been flying over the town to monitor events, the explosions heard outside the town were the result of mortar fire.

Occasional long-range random fire, however, still hit the centre of town. There were unconfirmed reports yesterday that the Rahman mosque in the town centre had been damaged.

Despite the support for the AIOR from the 103rd Battalion, the source at the municipality said that it was wrong to see the AIOR as part of the Libyan National Army (LNA) under Halifa Hafter. It was a legal force army force, he said, recognised by the Presidency Council (PC). But it did not support Hafter. Likewise, Sabrathans supported the police and the army. They wanted the militias crushed. But they too did not support Hafter or the LNA at all, he insisted.

Last week, the PC ordered a ceasefire in Sabratha, telling Juwaili to secure the town. On Wednesday, PC head Faiez Serraj met a delegation of Sabratha elders accompanied by the town’s member of the House of Representatives, Mabrouk Elkhatabi, to hear discuss plans to end the crisis.