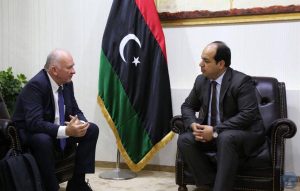 Reports that the Hungarian embassy will soon reopen in Tripoli have been confirmed by an embassy official.

According to the Libyan news agency LANA, it was announced at a meeting between Presidency Council deputy leader Ahmed Maetig and Hungarian ambassador Bela Marton in Tripoli on Wednesday that technical staff would be working at the embassy as of the first week of next November to prepare for its reopening. The news had been welcomed by Maetig.

Speaking to the Libya Herald, the embassy official would not give a date for the reopening but said that it would be “very, very soon”.

So far, Turkey and Italy are the only two countries to have formally reopened their embassies in Tripoli  although the British and Dutch now have a rolling permanent presence. This means that there are diplomats in Tripoli all the time, replacing each other regularly.

This past week saw almost the entire British embassy staff back in the capital.