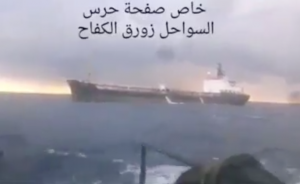 Contrary to reports earlier this week that the oil tanker Goeast had capsized after it was attacked by the Libyan coastguard off Zuwara last Friday,  it finally arrived off Malta today. All the crew are safe, Russian officials say.

The shipping website MarineTraffic.com shows that it arrived off Malta shortly after midnight last night.

Last Saturday, Libyan navy spokesman Ayoun Gassem said that the tanker, owned by a Crimea based company but Comoros-flagged, had been fired upon after it refused demands from a coastguard boat to stop and be searched. He claimed that it had been involved in fuel smuggling.

Video footage of the attack, posted on the coastguard’s Facebook page showed the Goeast being hit twice and liquid then gushing out. According to Gassem, the engine room and fuel tanks were hit and the vessel then started listing.

The Russians are presenting a somewhat different reason for the incident. Rather than being involved in smuggling, they say that there had been “financial issues” between the Swiss company that had chartered the tanker and unnamed Libyans.