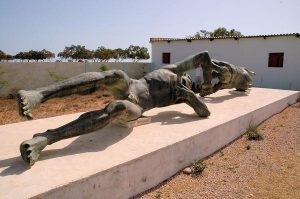 Bronze statues of the Philaeni brothers at the museum in Sultan

The head of Sirte Antiquities Office has denied reports that two bronze statues have been stolen from the museum in Sultan. Yesterday it was claimed that the two statues, of the Carthaginian Philaeni brothers, had been taken from the museum some two years ago.

According to Sirte antiquities director Abdel-Azim Hafez, the statues were removed simply for safe-keeping with the knowledge of UNESCO and are now being kept elsewhere. They had been moved, he explained, because because of the current political situation and because the outdoor site was insecure, the staff had not been paid and there was a need to have night guards as well.

The statues originally adorned the Marble Arch or Arch of the Philaeni that was built by Italian Fascist governor Italo Balbo in 1937 to mark the border between Cyrenaica and Tripoltania. Qaddafi had it blown up in 1973.

According to Roman historian Sallust, the two Philaeni brothers were chosen to as envoys represent Carthage in a diplomatic move designed to put an end to wars between it and Cyrene. Fearing yet another costly war, the two cities agreed around 350 BC to have envoys set out from both places on a certain day. Where they met would become the border between the two.

However, when the two teams met it was much closer to Cyrene than had been expected and the Cyrenian envoys accused the Philaeni of cheating, of setting out before the day of departure. They demanded that the border be drawn wherever they wanted. This the Carthaginians refused. The Cyrenians then offered a choice: they would accept the border if the Philaeni agreed to be buried alive there. Alternatively they had to be allowed, as in the first demand, to settle the border further west but would themselves be prepared to be sacrificed there.

The Philaeni agreed to be buried alive.

Above where there were buried, an altar was erected by the Carthaginians in their honour. It has long gone but the border lasted for almost 2,000 years. It continued as the frontier between the Roman provinces of Africa Proconsularis and Cyrenaica, between Western and Eastern Roman empires, between the Zirid kingdom and the Cairo-based Fatimid caliphate, between the Hafsid kingdom in what is now Tunisia and the Mamlouk sultanate. The Ottomans also retained the division.

In the arch built by Balbo, the two brothers were depicted lying flat, as if buried, above an altar. The bronzes were placed over the entrance to the arch.

When Qaddafi destroyed it, they along with some other fragments were removed to a museum in Sultan. 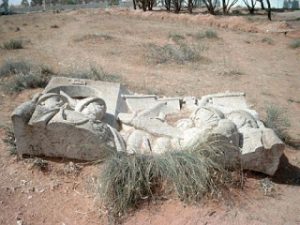 A remnant of the Arch of the Philaeni (Photo: Social media)

Other statues and artifacts from the Italian era to be stolen, destroyed or removed since the revolution include the much-loved Gazelle statue and that of fighting lions in Tripoli. The former was destroyed by fanatics before its remnants were removed by the former pro-Islamist Libya Dawn regime. The later was removed by the same regime, supposedly to protect it.