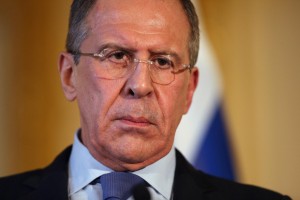 In an outspoken attack, Russian foreign minister Sergey Lavrov has described NATO countries as mean and dishonest in their 2011 air assault which helped overthrow the Qaddafi regime.

Speaking in the Black Sea resort of Sochi, Lavrov was reported by the Russian news agency Tass as saying that the UN Security Council no-fly resolution imposed on the regime’s airforce was “violated and crushed” by NATO.

The Security Council had ordered that all necessary measures could be taken if Qaddafi’s warplanes took off but, said Lavrov, they did not.  Force could only have been used if they had.

“Instead of this,” said Lavrov, “our counterparts from NATO deployed their air forces and bombed Qaddafi’s army, helped rebels, among whom there were a lot of terrorists and liquidated the Libyan revolution’s leader”.

He added: “The UN Security Council resolution was most seriously violated and crushed. This is about dealmaking skills of our partners, who just behaved meanly and dishonestly.”

Lavrov’s comments came in response to a question put to him at the Global Young Diplomats Forum which is being held in the Russian resort.