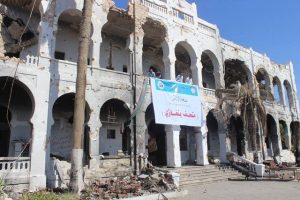 There are plans to turn the former Benghazi palace of King Idris, badly damaged in the recent fighting with militants, into an archaeological museum.

The Manar Palace, one of the city’s oldest colonial buildings, became the site of  Libya’s first university before that moved to its own custom-built campus in 1968.

Now scarred by bullet and shell holes with part of its interior wrecked, the palace has  been earmarked  by the Antiquities Authority who want to turn it in to a museum and exhibition centre.

One member of the authority explained: “We have thousands of stored artefacts that we would like to display in the Benghazi Museum so that the Libyans can see the history of this city from prehistoric times through the Greek, Hellenistic, Roman, Byzantine, Islamic, Spanish, Turkish, Italian, Kingdom and Republican eras”.

Under the Antiquities Law, all buildings over 100 years old come under the control of the authority. The question now is where it will obtain the funding to restore and equip the elegant building as Benghazi’s new museum.