“Only a few gaps” in Tunis talks says UNSMIL 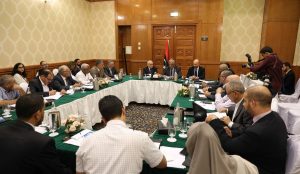 UNSMIL has produced a surprisingly bullish summary of today’s resumed Joint Drafting Committee talks in Tunis,  saying there were only a few remaining gaps to be filled before agreement could be reached.

On Monday evening the House of Representatives (HoR) delegation said it was withdrawing from the process accusing the State Council (SC) of obstruction and bad faith.

UNSMIL chief Ghassan Salamé postponed further discussion until today. He clearly persuaded the HoR delegation to return to the table. The UN organisation explained this evening “Bilateral and trilateral meetings with the UNSMIL team, as well as internal consultations within the delegations over the past two days, succeeded in bringing both sides a step closer”.

UNSMIL said there has been agreement on the separation of executive powers between the Presidency Council (PC) and a ministerial cabinet.  It also said that “for the most part” the powers and responsibilities of each body were “identified”.

UNSMIL also explained that the Joint Drafting Committee had agreed on the decision-making processes of the PC which would be cut to three members. It had also agreed on the criteria necessary for someone to be nominated for PC membership.

UNSMIL concluded by saying that: “More technical work is still required to further refine the outstanding texts.  The Joint Drafting Committee will resume its session at UNSMIL tomorrow to bridge the few remaining gaps”.