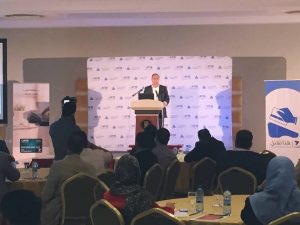 Tadawul Tech held a workshop in Tripoli on its e-payments services and developing the e-payment service sector in Libya (Photo: Tadawul).

Under the slogan of ‘‘The role of businessmen and sovereign institutions in supporting e-payment solutions’’ a workshop was held in Tripoli this week on the role of e-payments.

The workshop was co-organized by Tadawul Tech and the Assaray Trade and Investment Bank (ATIB) and sponsored by the Ministry of the Economy, the Central Bank of Libya and the General Union of Chambers of Commerce, Industry and Agriculture.

The privately-owned Tadawal, which says it provides the biggest network of e-payment solutions in Libya, was promoting its Merchant (Tajer) e-payment service card.

The organizers said that they were increasing e-payment services in the framework of ongoing development and creation of new banking products and services and in an effort to create a paradigm shift in Libya in e-payment services. Tadawul said that it aimed at completing the electronic payment loop, in partnership with the privately-owned ATIB.

Highlighting the importance of cashless e-payments services, the organizers stressed the need for Libya to switch to the use of e-payment and Tadawul’s role in creating a fully secured environment in the electronic payment cycle starting from the consumer, to the dealer, to the wholesaler and then to the bank. 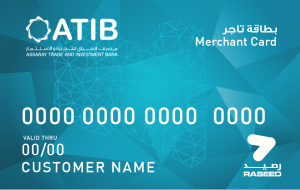 Tadawul is launching its Tajer (Merchant) card as part of its e-payment solutions in an effort to help solve Libya’s cash crisis (Photo: Tadawul).

At the workshop panel discussion, ideas and solutions were presented between businessmen, a trading company, the ATIB bank and the central Bank of Libya. Discussions took part on how to take advantage of the Merchant card and how it can be used by traders as an option with full efficiency and security in the bank payment cycle, providing daily consumer necessities on a 24-hour basis.

The organizers also confirmed that this service will benefit all traders and businessmen in providing secure, fast and integrated electronic payment procedures.

It will be recalled that Libya is currently going through acute economic problems, including high inflation and cost of living and a huge cash crisis. The cash crisis is caused by the state’s deficits and political insecurity which has led to merchants and businesses hoarding their money at home rather than depositing it into their banks.

The Libyan Audit Bureau and Central Bank of Libya had launch a nationwide campaign to encourage e-payment services through the use of Point of Sale Machines (POS). However, distribution/take-up of POS machines as well as debit cards has for various reasons been quite slow, with most merchants, especially smaller ones, still preferring to deal in cash.

Moreover, merchants who have installed POS machines are surcharging anything from 20-40 premium for the service. This they tell Libya Herald is the premium they themselves have to pay middlemen or corrupt bank employees in order to gain access to cash in their own bank accounts.

On the other hand, many smaller suppliers who deal only in cash still needed to be paid in cash, which meant that the e-payment loop was not complete across suppliers, merchants and consumers – thereby still creating the need for cash. Many small business and individual traders are not registered entities – operating in the black market, and therefore have or prefer not to have a bank account or debit card.

Tadawul hopes to close that loop and bypass the need for cash in Libya – which is still very much a cash-based society and with a sizeable black market sector.

The banking sector in Libya, with its 42-year Qaddafi-era centralized welfare state legacy, is quite archaic and is in need of deep reform to bring it on a level with its peers in say Tunisia or Egypt. Banking laws need total updating and the CBL’s grip on the private banking sector needs to be reviewed in order to allow the private sector to flourish and lead economic innovation and growth in the country.