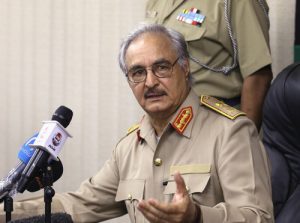 Armed forces commander-in-chief Khalifa Hafter has ordered the establishment of a new Libyan National Army (LNA) unit in Bani Walid in a move which will advance the LNA to a strategic position  half way between Tripoli and Misrata.

The new 27th light infantry brigade’s commander is to be Abdullah Al-Warfali from the locally-powerful Warfala tribe. The unit is being formed and equipped by LNA trainers. It is not clear when it will become fully operational.

The brigade will be part of the central or Gulf of Sidra military zone, whose Rada* (Deterrence) units are commanded by Major-General Mohamed Ben Nayel. The western boundary of the  Sidra zone had until now been Sirte. Bani Walid is some 220 kilometres further west from Sirte.

The establishment of this new formation comes days after Hafter created a new Rada force headquartered in Ajdabiya.

* The LNA “Rada” forces have no links with the militia of the same name in Tripoli, run by Abdul Raouf Kara.