Why do Africans migrate? A report 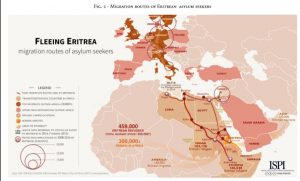 A report entitled ‘‘Out of Africa. Why people migrate’’ by ISPI, the Italian Institute for International Political Studies, says that European representation of African migration by media and politicians is ‘‘politicized’’ and ‘‘alarmist’’. This has led to ‘‘increasingly more restrictive migration policies’’.

The 170-page report published last week says that the EU and its member states have failed to look below the surface of migration flows as they have repeatedly preferred to turn a blind eye to their root causes.

Contrary to popular perceptions, the report suggests that the size and destinations of African migration are similar to global migratory patterns and that African migrants are more likely to move to neighbouring countries within their African sub-region than elsewhere, because of the higher costs of moving over longer distances. The study concludes that in fact there is a larger than popularly perceived number of sub-Saharan countries each hosting over two million displaced people last year.

The report says African migration is in fact a complex and multi-faceted phenomenon and easy, convenient explanations distort the truth. By continuously placing the spotlight on border protection and on how European societies are affected by migration flows, they ultimately produce unintended effects.

The study reports that restrictive European migration policies have caused migrants to diversify their destination countries and to resort to riskier routes and irregular practices. These policies also have a negative impact on migrants’ decision to return to their home countries: even if they want to, migrants are less likely to leave Europe if they know it will be difficult to eventually come back, the report says.

And contrary to popular perception, the report concludes that a higher level of African development – rather than poverty – as well as the spread of technnology and mobility, are strong drivers of African migration.

The report says that migration should not be seen purely as a response to external conditions such as global inequalities otherwise many more African migrants would be on the move over long distances.

Indeed the report reveals that migration from Africa, in proportion to the total African population, has actually slightly decreased since the 1990s and that, especially with regards to sub-Saharan migration, it has mostly been directed towards other African countries.

Equally, the oft quoted climate change is presented in the report as a threat multiplier and a supplementary stress factor compounding already difficult realities such as weak governance, limited infrastructure and political instability – rather than as the root cause.

The report questions the claim that most sub-Saharan African migrants move out of Africa to chase better socio-economic opportunities – as most migrants remain in Africa.

In concluding, the report says that African migration will not be disappearing any time soon. It says that restrictive migration policies aimed at better patrolling the EU’s external borders have not solved the issue of migration from Africa, instead generating unintended consequences.