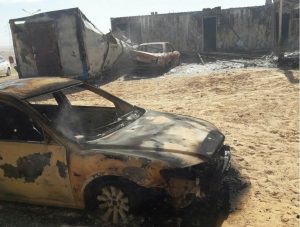 A dawn attack on a checkpoint 60 kilometres south of Ajdabiya has left at least two, possibly three, members of the Libyan National Army (LN) dead and three more wounded. They were taken to the Imhemed Magarief hospital in Ajdabiya. A report that some soldiers were taken away by the attackers has not been confirmed.

The so-called Islamic State (IS) is being blamed for the assault on the Tisan checkpoint and it has claimed subsequently responsibility, although this means little since it claims responsibility for almost any attack. However, according to LNA spokesman Colonel Ahmed Mismari, one of the dead was decapitated, usually a sign of an IS attack.

The entire checkpoint, including cars and prefabricated structures, were set on fire and destroyed. According to survivors, the attackers arrived with seven vehicles. When they left they took weapons with them.

Two of the dead have been named as Muftah Al-Alioui Al-Magharbi and Ahmed Musa Al-Fakhri. They were members of Battalion 152. It is reportedly that one of the bodies was left booby-trapped by the attackers, with explosive devices attached. The guard room was also booby trapped but these and other devices were disarmed by engineers.

According to the LNA, an investigation has been launched and troops are sweeping the area to try and track down the attackers.