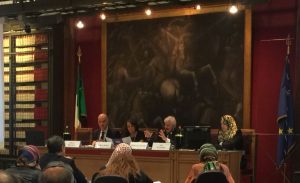 Libyan women activists and members of parliament took part in a seminar in Rome (Photo: Minerva).

The group of Libyan women met on day one with the Italian Deputy Foreign Minister and discussed points of common interest between the two countries including women rights in the constitution, combatting terrorism and illegal migration.

On day two a number of panels consisting of Libyans and Italians met in the Italian Parliament to present and discuss a number of subjects. Minerva presented its research conducted in western and eastern Libya and issues of Libyan youth, the resistance to the Italian-Libyan agreement and resisting extremist thought, were discussed.

On panel two the difficulty in working in Libya, investment in projects to reduce unemployment of youth and women were presented and debated.

The third panel discussed cooperation between Italy and Libya in combatting illegal migration. The final panel presented and discussed the huge thrust that Libyan women and women NGOs could give to spreading the culture of forgiveness and freedoms against religious conservatism and the use of weapons.

The international community was also criticized for doing less and saying more and for increasing divisions between Libya’s different factions by pursuing different national interests within Libya.