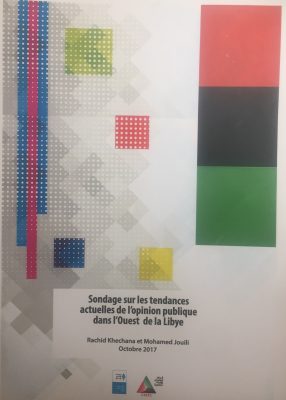 Few Libyans in the west of the country believe that new elections will end the country’s current situation, an opinion poll published today has indicated.

Carried out in Tripoli and four west Libyan towns, it suggests that no more than eight percent of respondents believe that new elections will resolve the crisis. Moreover, only 37 percent – a little over a third – say that they will take part in them when they occur while 27 percent say they will not. Another 37 percent say they have not made up their minds as yet.

As to how they might vote, just 17 percent say they will trust political parties. The other 83 percent reject this, saying they can support only independents.

The poll, carried out in the capital, Gharyan, Sabratha, Sorman and Zuwara, also shows that of those asked, there is little faith in a consensus government solving the country’s problems: a mere 7 percent back it.

Support of Saif Al-Islam Qaddafi taking over the country fares only marginally better, with just 10 percent supporting the idea.

The way out of the crisis most favoured by those polled is the establishment of a constitution (with 34 percent support), dissolution of the militas at 26 percent and military rule 12.5 percent.

The findings were unveiled today in Tunis, ironically at the same Africa Hotel where yesterday the Qaddafi family lawyer claimed that Libyans were eagerly awaiting Saif Al-Islam’s return to political power.

Asked who is responsible for the current crisis, 29 percent blame the militias, 26 percent the country’s successive governments since the revolution, 20 percent outside influence and 12 percent Libyan political parties and movements.

Then asked directly what they think about the militias, a large majority say they protected the revolution but must now go: 75 percent want them disbanded.

Other findings from the poll show that 43 percent of Libyans, or at least those in the west of the country, think the 2011 revolution was due to outside influence, compared to 46 percent saying it was a wholly Libyan revolt.

One of the other not-unexpected findings is that 87 percent are opposed to a federal system in Libya. In Zuwara, the “capital” of the country’s Amazigh community, though, support for federalism is relatively strong, at 43 percent. In Tripoli, it is just 12 percent and in Gharyan, eight percent.

The polling was carried out by the Tunis-based Centre Maghrebin d’Etudes sur la Libye (CMEL) between 20 July and 8 August. Some 1,211 people were interviewed, split almost evenly between males and females. All were over 18 years of age.

Unveiling the findings today, CMEL’s Rachid Khechana said that they unlined the need to find a political solution soon, to reestablish institutions of state and ensure the militias were disbanded.

It had not been easy doing the polling, he said. But the intention was to cover other areas in further polls. The plan was to train more pollsters, either in Tripoli if the security situation permitted, or in Tunis if not.