Presidency Council leader Faiez Serraj flew to Sabratha this morning to inspect damage to the town in the recent fighting and prioritise its resulting needs.

Met by the town’s mayor, Hassen Dhawadi, and Brigadier Omar Abdul Jalil, the commander of the Anti-IS Operations Room (AIOR) which last week crushed the local Amu Brigade, Serraj then had extensive talks with them and other officials about the town’s immediate requirements.

He was accompanied by the PC’s chief of staff, Major-General Abdulrahman Al-Tawil, the head of the Presidential Guard, Major-General Najmi Al-Nakua, and interior ministry undersecretary Abdussalam Ashour.

Serraj poured praise on the AIOR and the “sons of Sabratha” for clearing the town of “criminals and outlaws” and “rogue armed groups”, although the 48th Battalion, which was linked to the Amu Brigade and had fought against the AIOR, had been legitimised by the PC. He said that the PC and its government of national accord would spare no effort in meeting Sabratha’s urgent needs, ensure that the town was safe and secure, and clamp down on illegal immigration and organised crime.

He was referring to the fact that the Amu brigade, as a major Libyan mafia, had made the town one of the epicentres of the human smuggling trade.

There has been much speculation in recent days that Abdul Jalil and the AIOR takes their orders from the Libyan National Army (LNA) of Khalifa Hafter, and that the takeover of Sabratha has extended the LNA’s position in the west of the country. Serraj’s visit was clearly designed to combat this and tie the town firmly into the PC’s political orbit.

Yesterday, the PC announced the formation of a committee headed by the undersecretary at the ministry of local government to assess the damage caused by the fighting in Sabratha. These included damage to the Roman ruins. It is supposed to report within a month. 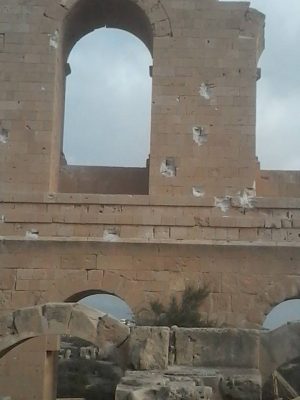