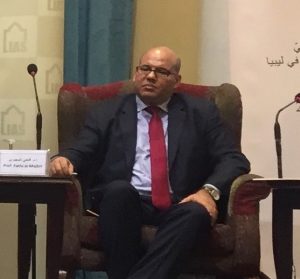 The discussions that have been taking in Tunis to amend the Libyan Political Agreement (LPA) by the dialogue committees of both the House of Representatives and the State Council have to succeed says Fathi Majbri.

“There is no other way”, the Presidency Council member and former education minister told the Libya Herald in an interview. “We can’t afford these negotiations to collapse”.

Asked whether UN special envoy Ghassan Salamé’s new action plan to bring peace to Libya will work, Majbri admits that things have not been easy. The country has reached a stage where the whole political class had failed in its responsibilities to the Libyan people, he says.  He accuses it of failing to understand the urgency in the need for reconciliation.

Yet he is optimistic. Despite the brinkmanship and arguments at the negotiations, he believes that dialogue between the two sides is in a better state of affairs than a couple of years ago.

“Before and during the Skhirat negotiations, just getting people into the same room was difficult. Now, the two delegations meet regularly together. They’re talking to each other.”  The fundamental signals for a settlement are promising, he insists. Things are not easy, he admits, but the problems can be solved “with good understanding and good will”.

“It’s a question of coming up with creative solutions, of finding the right formula”. He adds: “I don’t think they are out to spoil things.”

He is optimistic: “There is good will in Libya to resolve the crisis,” he says, but it is a question of finding the right solutions.

Majbri, who did his PhD in economics at the University of Glasgow and taught there, is not one who believes that if only the rest of the world would leave Libya alone it would be able to resolve its problems by itself.

“We need international experience,” he says. Libya may be different, but “we need their experience of how other conflicts elsewhere in the world have been solved and then use that experience to help Libyans find a compromise”.

The UN, he says, can play a major role in making both sides in the current divide understand the problems better, and offer them alternative solutions.

Elections – not now but not too long off either

As to whether Libya is ready for elections, his answer is short and to the point: “Right now, no.”

With Libya’s present divisions – two governments, a parliament in the east and a State Council in the west – who, he asks, is going to call for the elections. And, if they are called, will the call be accepted?

The country’s political institutions need to be reunified first “then we can call for elections”. Reunification, he says, means rebuilding a strong army, a reformed judiciary, having a real functioning government and empowering municipal government as well.

“If we can do a minimum job in these areas, and others, within a year, then the country will be ready for elections.”

But he also warns against the view that everything has to be fixed first before elections can take place. It would be equally unacceptable, he believes.

“If we say we need to build the country first and that it will take three or five years before elections can take place, then people will be fighting furiously to be in this government. That will not send reassuring signals to anybody”.

The Libyan people need to be assured that they will be consulted “within a year” as to who leads them, he says.

On the proposed constitution from the Constitution Drafting Assembly, Majbri is sanguine.  For him the important is that there has to be a constitution in place soon.

“If we can get a constitution ready for a referendum by the end of 2018, after reunifying the government, that would be the perfect scenario.”

As to whether the CDA’s proposed constitution should it be overhauled or amended, he does not see why it should not be presented for a vote as it is, and let the electorate decide.

“In my experience, what the power elite in Libya think and want is different to what the silent majority think and want. We’re told that people aren’t very happy with the proposed constitution, but we don’t know what ordinary Libyans think about it.”

Libyans, he says, “might surprise us all and accept it. There is no harm in consulting the people with the existing constitution, and see if they accept it or not.”

He believes, though, that Libyans are convinced that so long as the country has no constitution there will be no political stability.

“They think that the country’s fundamental problems can be solved by a constitution.”

It is an idea he agrees with.  No constitution, he points out, would allow the militias. It would also deal with problems like resource allocations between areas.

Getting a constitution has to be one of the top priorities, he insists. It will provide legitimacy for those running the country.

The issue of federalism

Federalism is a loaded word in Libya, Majbri notes. Libyans instinctively react against it, yet they want decisions to be local.

“People see it as one step towards dividing the country. They don’t like the idea of federalism, yet they want more power at a local level,” he says, explaining the contradiction.

In 2013, he says, there was a nationwide survey about the constitution issue. “We went to all areas – Sirte, Derna, east, west, south. Only eight percent supported federalism, even in Cyrenaica. But all agreed on the elements of federalism.”

People said they did not like centralisation, he explains. They wanted national resources being distributed and managed locally. They certainly did not want local government to be appointed. They wanted it elected.

“People want the elements of federalism, but not the concept of it,” Majbri explains, noting that empowering local authorities is the answer.

But those authorities need to be bigger than the current municipality, the baladiya.

“We need a reshaping of the local authorities”, he believes. “Under Qaddafi we had 23 shabiyat (disricts).  In 1963 [during the time of King Idris], we had 10 muhafazah (governorates). A hundred baladiyas is too much but equally people may not accept the three provinces.”

At the end of the day, though, he says the issue in not about the symbolism of having separate identities – the idea of going back to the provinces of Cyrenaica, Fezzan and Tripolitania.

“It’s about realities. It’s about whether people are going to have a fair say in their government, and whether they have fair access to resources.”

Decentralisation is “a must”, he says.  It is one of the prime answers to ending the current conflict.  “We have to shift from a centralised state to a decentralized state.”

The fact that is has not happened since the revolution is, he believes, one of the reasons why Libya is in the mess that it is.

We need to build up the nation identity,” he stresses.