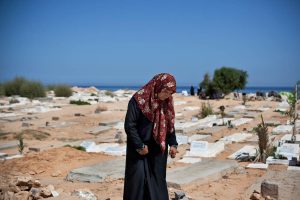 A grieving woman in a Tripoli cemetery (Photo: Benjamin Lowy)

Nine dead children were among the 23 civilians who perished during October according to UNSMIL figures which also showed the number of non-combatants to die doubled over the  figure for September.

The six boys and three girls, including a new-born child,  died in the raid by unidentified warplanes on a farmhouse in Derna’s Al-Fatayeh district on 30 October. Also killed in that attack were three women. Another two females, a man and four children were injured in this strike.  UNSMIL recorded that ambulances carrying injured civilians from the air raids were not allowed to pass through checkpoints at Martouba and Kirsa which it said were controlled by forces allied to the Libyan National Army (LNA)

The month began with the Misrata courthouse gun and explosives attack by the so-called Islamic State in which two male civilians were killed along with two security men. UNSMIL says that it has not been able to establish how many of the 41 injured in this assault on 4 October were civilians.

Two days later the body of a mentally-ill Tebu man was found in Kufra with gunshot wounds. UNSMIL said that he had gone missing 24 hours earlier and believed that he had crossed the dividing line with the rival Zwai community.

At the start of the month UNSMIL recorded the death of a man in Benghazi in a dispute between two families. Also in Benghazi on 16 October two men, one of them an Egyptian, were killed in an attack on a restaurant, it said because of a land dispute.

Not all the victims of violence were young. In clashes in Tripoli’s Ghraret district between the Rada (Deterrence) Force and members of the Al-Mungar family, apparently over drug smuggling, an 81 year-old Sufi imam was killed by gunfire. UNSMIL said that there were other casualties in these engagements but pointed out that it had been unable to find out if they were civilians.

On the 21st of the month UNSMIL recorded that a Tawerghan woman had received gunshot injuries when her refugee camp in Sidi Al-Saeh was attacked by the Al-Kani brigade.

Among the other killings, a Qaddafi-era officer was gunned down as he sat in his car in Warshefana.  In the same district suspect car-jackers shot dead a store owner.

Two men kidnapped in Ajdabiya in July were found shot dead in Benghazi. UNSMIL said it had seen a video in which one of the murdered men had confessed to being involved in terrorism.

The UN organisation also noted the discovery of 36 bound bodies near Al-Abyar at the end of the month but did not comment on whether any of the victims were civilians.

Unexploded ordinance, which UNSMIL calls Explosive Remains of War (ERW), continued to take a toll in Benghazi after the recent fighting against militants. Five men were killed and a boy and six other male were injured. In one incident two men, including an Egyptian, were blown up and three others wounded when they went to clean a property around which fighting had raged.