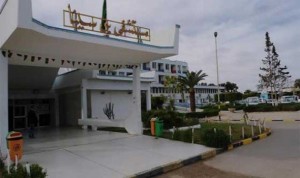 At first sight it looks like a deserted building but in fact it is the Primary Health Care Unit in Sirte. Upon entering, the traces of war everywhere.

As a health unit, it lacks the simplest requirements and is only functioning at all thanks to dedication of its staff. It is the same story in the main hospital and the other 32 health centres in the town, including the main Ibn Sina hospital, according to Mohammed Idris, in charge of Sirte’s primary health care. He said that this centre used to see about 500 pregnant women a year. It also once looked after some 5,000 patients with diabetes. Now, he said,  these services cannot be provided for lack of facilities and equipment. 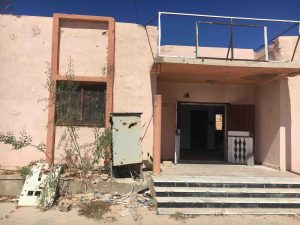 Idris complained that those in Tripoli who are ultimately responsible for healthcare in Sirte have ignored repeated pleas from the town to help restore services.

He said that the World Health Organisation’s vaccination campaign against polio, mumps, measles and rubella for children which began this week, had been organised with little outside support. This might however be contested by National Centre for Disease Control which has said that by today, it hopes to have inoculated up to 35,000 children from Sirte and the surrounding area.

One problem Idris said that his team faced was a lack of up-to-date health cards because the records had been disrupted by two years of war and the displacement of locals.

He added that central government officials were absent and did not attend meetings needed to plan the restoring of the town’s health services.

According to figures from Idris’ office most of the town’s health facilities lack the simplest equipment. They operate on a wing and a prayer with devices that need maintenance and recalibration.

The foreign medical personnel who once worked in Sirte are all gone,  he said, thanks to the collapse in security and their inability to get their money out of the banks.

The situation has  become so bad that local activists launched a fund-raising campaign after visiting the renal dialysis department at the town’s main hospital, the Ibn Sina, which reopened in April. This is only one department which the hospital administrators say is in urgent need of support. This, they maintain, is simply not coming from the central government in Tripoli.

Recently, the department of obstetrics and gynaecology reopened. It now contains 72 beds and some ten incubators but is still without medical supplies.

A laboratory doctor at the hospital complained that it could handle only 20 percent of the tests that were sent to it, because it lacked supplies and functioning equipment.

A radiologist colleague said his department could hardly function for lack of maintenance and even lacked film for X-rays.

Haniyah Bu Kherid,  a municipal council member with oversight of the town’s medical facilities said the system was in chaos. There was no plan and no coordination. Promised help from international organisations had yet to appear.

Among his many urgent appeals to the government and foreign donors, most recently for help to get the town’s port functioning again, Sirte mayor Mukhtar Al-Madani has singled out health in the town as a priority.