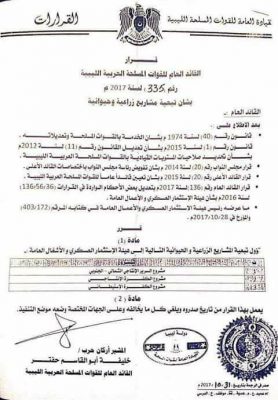 In a further move to extend the Libyan National Army’s (LNA) influence beyond military matters, armed forces commander-in-chief Khalifa Hafter has ordered it to take over three southern farming projects.

The Northern Agricultural Project at Al-Sarir to the north of Kufra and two smaller farm businesses near the town are to come under the control of the Military Authority for Investment and Public Works (MAIPW) with immediate effect according to Hafter’s 335th decision of this year. He gave no reason, such as security, for the move.

Earlier this week, the LNA took over the import of four-wheel drive vehicles through Benghazi port. It said this was being done for security and to stop the trucks getting into the hands of smugglers. Under the new regulations, the LNA will need to know who has imported such vehicles, who has bought them and the purpose for which they will be used.

With the effective closure of Tobruk port to all trade except that directly related to the town, the LNA-controlled Benghazi port becomes to sole entrepôt centre in the east of the country. A week before Hafter ordered the Tobruk port shutdown, the Benghazi port authorities were told that ship bunkerage and other oil supplies were now a monopoly of the MAIPW.